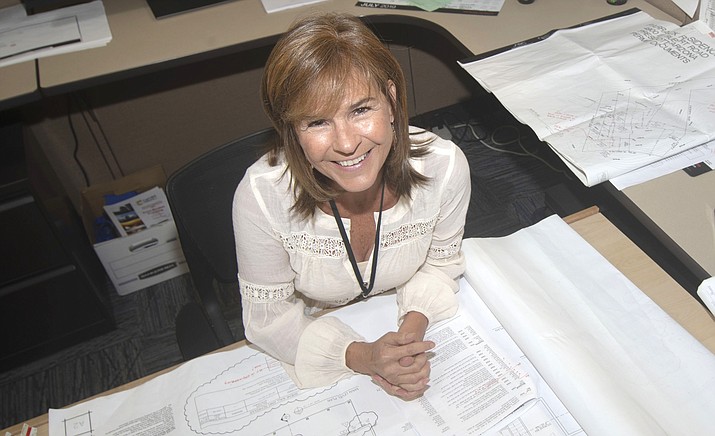 Carrie Holmes’ boss describes her as a person who looks for solutions rather than someone who tries to shut down projects.

Building contractors and developers will appreciate Holmes’ new role as Yavapai County chief building official, said Jeremy Dye, assistant director of Development Services. “In my experience with her, I would describe her as someone who works to say ‘yes’ to people rather than saying ‘no’ to projects,” Dye said. “She fits very well into her new role.”

Holmes has worked for Yavapai County for nearly 15 years starting as a plans examiner and working her way up in an industry that traditionally has been a man’s world.

Hard work is nothing new to her, having jumped into construction at age 17 working at a lumberyard in Salt Lake City. She acknowledges her work ethic and competitive attitude that earned her a manager’s position within a year and a half.

“I’m kind of a competitor. I would think, ‘If he can do it, I can do it,” Holmes, now 60, said. “As a woman you have to work a little harder. I think you have to go outside the box of your responsibilities and do a little extra. But once you earn the respect of the guys, I’m telling you, you have it forever.”

Dye said the chief building officer’s job involves day-to-day management of plan examiners and field inspectors, as well as oversight and enforcement of all building codes in Yavapai County. He praised her for her work with adoption of the 2018 Building Code this year by the county and other jurisdictions.

In addition, Holmes has been integral in the recent department-wide transition to a new computer software system that will simplify the permitting process for developers and contractors.

“So many of us locally in the industry have worked with Carrie as a plan examiner and watched her grow and blossom and embrace the industry,” Griffis said, adding that she has known Holmes for 13 years. “To have a woman promoted to this position is phenomenal.”

After her experience in the lumberyard, Holmes married a contractor, had children, then returned to work with the same business owner.

She moved to Arizona 20 years ago, and entered the Yavapai College Construction Building Tecnology certification program. Each year, students built a house from the ground up, and she soon became a teacher’s assistant. She and her husband bought, remodeled and sold houses before she applied for the job with the county.

There was the matter of a five-year hiatus from the physically hard work involved in hands-on construction jobs.

“I stepped aside and became a dental assistant. It was a five-year thing, and I said, ‘No, this is not me.’ It was like doing baby construction in somebody’s mouth,” she said with a laugh describing the caulking and repair work common to both professions. “That was my short other career.”

Actually, her plan was to go into the architectural drawing field. The instructor said she needed the building technology classes first. “I was 40 at that time, and weighed 100 pounds.”

The classes involved making trusses, and building everything from the foundation up. “I got to touch everything — they put me into some tight spaces.”

Dye talked about the experience and knowledge Holmes brings to the job, and said “I think our customers are going to like working with her.”

That feeling goes both ways. Holmes said she has liked everyone she has met.

“I enjoy the people I work with and I enjoy the customers. The reason I took this position was to be able to make a little bit of difference, to make it better on the contractor and our team,” she said, adding that she has learned from her predecessors, “because I’m too damn old to take on the stress. I hope I have some good ideas to improve things a little bit.”