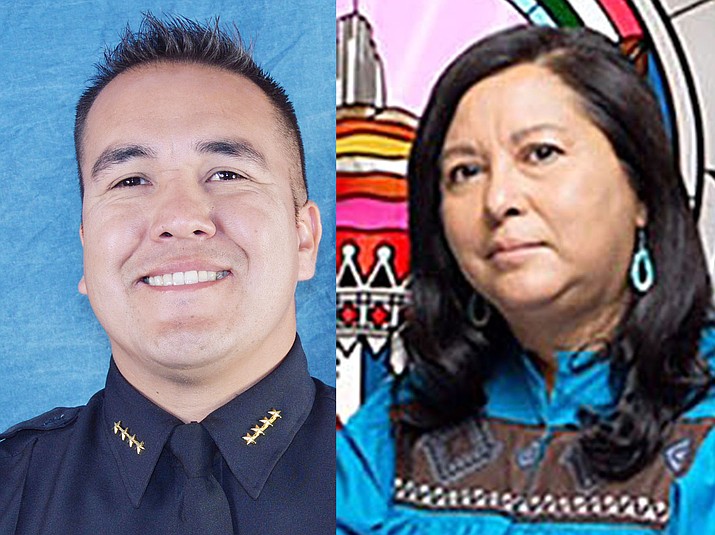 With 190 and 111 votes, respectively, Jon Huey and Genevieve Datsi finished first and second in the Nation’s Aug. 3 primary as they look to replace Jane Russell-Winiecki. YA National courtesy photos

VERDE VALLEY – Yavapai-Apache’s police chief and one of the Nation’s tribal council members are finalists to become the next tribal council chairperson.

With 190 and 111 votes, respectively, Jon Huey and Genevieve Datsi finished first and second in the Nation’s Aug. 3 primary as they look to replace Jane Russell-Winiecki. Russell-Winiecki is not seeking re-election.

Huey and Datsi will move on to the Nation’s Sept. 21 general election.

Since 2002, Huey has worked with the Yavapai-Apache Police Department. He also served two terms on the Nation’s tribal council.

According to Yavapai-Apache Public Relations Manager Don Decker, anyone who wishes to challenge the Aug. 3 results can do so in writing within 10 days after the election board certifies the election results. Which means that the results would become official on Aug. 13, Decker said.

The two finalists for chairperson and vice chairperson will move on to the Sept. 21 general election. The Nation also looks to fill a third vacancy, as Tribal Council Member Sierra Russell announced on Aug. 1 that she will not seek re-election, Decker said Wednesday in an email. That seat will also be filled with the Sept. 21 election. The candidates for that position will be made official on Aug. 13, Decker said.

The Yavapai-Apache Nation will hold a public forum from 9 a.m. until noon Saturday, Aug. 31 at tribal council chambers for the public to ask questions of the candidates.

Election results, as well as a copy of the Yavapai-Apache Nation’s constitution, can be found at yavapai-apache.org.