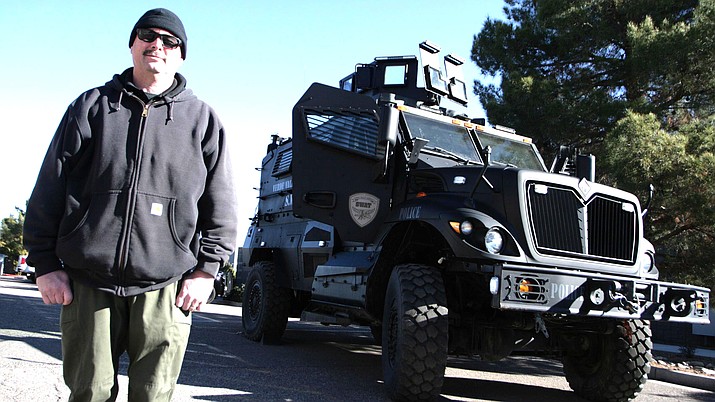 From 2007 until 2012, the US Government’s Mine-Resistant Ambush Protected program deployed more than 12,000 vehicles in Iraq and Afghanistan wars.

In 2014, the Cottonwood Police Department acquired one of those vehicles – an MRAP – through a grant from the U.S. Department of Homeland Security.

Including shipping the vehicle and getting it operational, the tactical vehicle cost the department about $4,000, Cottonwood Police Officer Christopher Dowell said. “That’s quite a bit of savings.”

Compare that to a deal on the same vehicle through eBay and the city saved something in the neighborhood of $290,000.

McDowell is the primary MRAP driver for the Verde Valley’s SWAT team. According to Dowell, the military “had older assets that would otherwise be scrapped or destroyed.”

“Better they go to law enforcement, especially agencies without funding for this sort of equipment,” said Dowell, who in June was named Officer of the Year by the Cottonwood Police Department.

According to his nomination statement, Dowell “responded to a critical incident where a suspect was actively firing rounds at law enforcement and innocent bystanders.”

Dowell fearlessly and with honor arrived at the scene with armored protection and assisted in the rescue of fellow officers and innocent civilians, all while taking gunfire from the suspect involved,” according to the statement. “This resulted in no casualties to civilians or law enforcement personnel.”

Verde Valley SWAT is made up of officers – they’re referred to as operators – from Cottonwood and Sedona police departments. One of its drivers hails from the Camp Verde Marshal’s Office.

Verde Valley SWAT is the area’s only agency with such a vehicle, according to Cottonwood Police Chief Steve Gesell.

‘When the need arises’

From a cost-benefit analysis standpoint, a gifted armored vehicle that is used between 10-15 times each year more than pays for itself, according to Cottonwood Police Commander and Verde Valley SWAT Team Commander Gareth Braxton-Johnson.

“These specialty-type vehicles do have some maintenance costs associated with them but by and large, the benefits of having heavy armor available during incidents where the risk is elevated is immeasurable,” Braxton-Johnson said. “We’ve certainly seen our share of national events that reinforce the times we’re living in.”

Though Verde Valley SWAT doesn’t use the vehicle daily – or even weekly – they “certainly appreciate the availability of having it when needed,” Braxton-Johnson said.

“Members of the Verde Valley Regional SWAT Team and the officers assigned to operate it have a sense of pride and appreciation knowing its capability of providing ballistic protection when the need arises,” he said.

According to Braxton-Johnson, the tactical vehicle “can comfortably carry 6-8 team members. But on occasion, based upon a specific mission, it has carried many more.”

In late-2018, the MRAP responded to a critical incident where a suspect was actively firing rounds at law enforcement and innocent bystanders. The officers, Braxton-Johnson said “arrived at the scene with this armored protection and assisted in the rescue of innocent civilians and fellow officers, all while taking gunfire from the suspect involved.”

“This resulted in no casualties to civilians or law enforcement personnel,” Braxton-Johnson said. “The ballistic protection offered by the MRAP is second to none, particularly in the midst of such an incident.”

“In law enforcement, we pride ourselves in trying to be prepared for any situation,” Braxton-Johnson said. “At times, our officers are exposed to situations that are tense, uncertain [as well as] rapidly evolving events. As such, we equip them with tools and equipment needed to handle nearly every situation. The MRAP is one such tool.”

Before Gesell came to Cottonwood, he spent six years with Scottsdale as SWAT commander and worked between 70-80 missions.

To Gesell, the MRAP is a life saver.

“It’s absolutely fundamental for police,” Gesell said. “It can stop a bullet. Think about the alternative.”

“I wouldn’t trust our people in a situation like that in a Humvee,” Gesell said.

“The only other armored vehicle in the county is operated by YCSO in Prescott,” Gesell said. “If we want the police to respond effectively, protect our citizens and address threats, then you accept the military surplus or spend $300,000-plus to buy something contemporary. We just don’t have those resources. This is the alternative, and we are grateful for it.”

“Vehicles like the MRAP are intimidating and look militaristic,” Gesell admitted. “In situations like the ones faced by officers, that intimidation factor saves lives.”