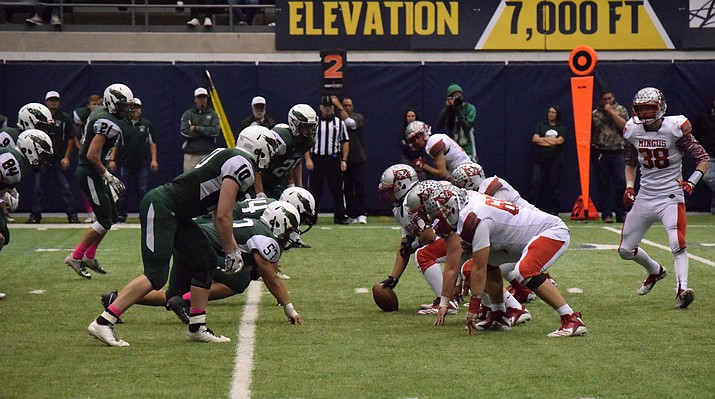 After playing four region games on the road last year and only hosting two, Mingus Union will have four Grand Canyon games at home this year, including closing out the regular season against Flagstaff and Prescott in Cottonwood. They open the season with three road games though. VVN/James Kelley 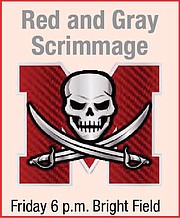 Once again it’s a tale of two schedules for Mingus Union football.

In the worst of times, the Marauders open the regular season with three road games and three of their four non-region games are away from home. However, in the best of times, they have four Grand Canyon Region games compared to two on the road.

“It’s the same schedule that we had last year, it’s just flip flopped,” Mingus head coach Robert Ortiz said. “We’re going to open up away at Combs, we’re going to open up at Show Low, our third game will be away at Mesquite. Every one of those programs we’re able to compete with and look forward to hopefully starting off the same way that we started off last year.”

Last season the Marauders, led by first year head coach Robert Ortiz, went 3-1 in the non-region schedule and 5-1 in Grand Canyon play. Their only losses were on the road to top 14 teams when they were short handed.

Ortiz isn’t sure if it’s a tough schedule because of the three road games to start the season or good because they have four region home games. 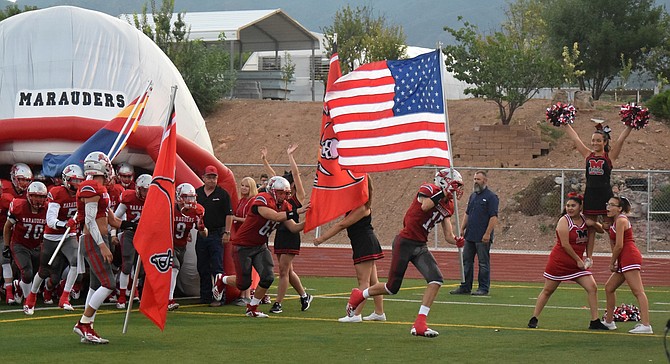 The Mingus Marauders take the field for their 2018 home opener on Aug. 17. The Marauders’ home opener this season will be on Sept. 13. VVN/James Kelley

“It’s kinda devil’s advocate, both sides of it,” Ortiz said. “It is tough to travel for three consecutive road games. (laughs) I don’t even know if they do that in college football or the NFL.”

Ortiz said as they went to the American Youth – BILT camp at Cal Lutheran in Thousand Oaks, Calif. last month they tried to prepare the Marauders for their long road trips.

“Some of them are long trips too, one of the ways we prepared the kids was through the Cali camp, we let them know ‘hey you’re going to be on a bus for seven hours on your way to camp, get used to it because we’ve got a three and a half hour drive to San Tan Valley and a four hour drive to Show Low,’” Ortiz said. “So we try to prepare them in that manner that ‘hey, this is something that you can expect, being on a bus three weeks in a row,’ two of them which are pretty long trips. But I do think it will pay off in the long run, in the end, because we’ll end up with four home region games.”

“We have a pretty good idea of what’s within our region and how we’re going to go about things,” Ortiz said.

One big difference this year is a second state tournament. In addition to the 1A-6A conference tournaments, the AIA has introduced the Open Division tournament, which will pit the top eight teams from 4A to 6A and will be considered the state champion.

The open tournament will be selected by a different method than the conference tourneys and last year if it was in effect would have moved two teams, Scottsdale Saguaro and Tucson Salpointe Catholic out of the 4A and into the open. Saguaro won the state title and Salpointe knocked Mingus Union out in the 4A second round.

Ortiz said the goal is the same as it always has been with the new tournament in place.

“Really what we talk about it surpassing what we did last year,” Ortiz said. “I think the foundation was set, the expectation, that bar was set pretty high. We were able to do something that Mingus hadn’t done in a while, which is win a playoff game. We thought we were going to be able to host a home playoff game last year, we fell a little bit shy of that unfortunately. So the goal right now for us is what it is every year: win the region, make the playoffs, have a home playoff game and then right after you do that you take it week by week and game by game.”

Last year the Coyotes started the season 0-4, including loses to Mingus Union opponents Mesquite and Seton Catholic Prep, but rebounded to go 4-2 to close out the season. After finishing third last year, Combs is expected to contend for the region crown.

Fun fact: The Coyotes play Mesquite and Seton again and in July went to a camp at Show Low, also a Mingus Union opponent this season.

Although the Cougars opened last season 0-3, they rallied to make the playoffs, losing 49-20 in the first round to state finalist Yuma Catholic. Show Low has made it to the playoffs 13 straight seasons.

Fun fact: Show Low and Mingus Union met in the first round of the Division IV 2011 playoffs, a 49-6 SL win at home.

The Wildcats started last season 0-3 but also almost made the playoffs. They went on a five game winning streak in the middle of the season, including a 45-14 win over Seton Catholic Prep, a state quarterfinalist.

Fun fact: Mesquite’s rival is Campo Verde, a 5A school in Gilbert.

The Sentinels stated the season 7-1 before losing three of their final four games, though they did upset Peoria 54-49 in the first round of the state tournament. The game on Sept. 13 is Mingus Union’s home opener.

Last season the Panthers beat Mingus Union for the first time since 2011 and enjoyed their best season since 2004. Coco lost their head coach though, as Mike Moran stepped down after one season.

Fun fact: The Panthers have had two winning seasons since 2004.

Last season the Volunteers didn’t beat a fellow 4A team until the final game of the season when they knocked off Mohave 34-20. Lee Williams’ last winning season was in 2014 when they were in Camp Verde and Sedona Red Rock’s division.

Fun fact: LWHS, which opened in 2012, is named after Kingman High School principal and volunteer firefighter Richard Lee Williams who died fighting the fire at from the Doxol Diaster in 1973.

Last season the Thunderbirds only beat one 4A team, Dysart, 42-21 an finished last in the region. After hosting Mohave, the Marauders have a bye before playing Bradshaw Mountain, Flagstaff and Prescott.

Last season despite losing to Mingus Union during the regular season and finishing third in the region, the Bears got to host the ninth seeded Grand Canyon champions in the first round of the playoffs. The Marauders won though and swept the two game season series.

After three seasons of Bob Castillo and Paul Wolf serving as co-head coaches, the Eagles are back to one head man, Todd Hanley. Flagstaff is looking for its first playoff berth since 2007. NAU, Flagstaff and Coconino all have new head coaches this year.

Fun fact: In the 2017 census, which set up the current alignment, Flagstaff had the most students (1,605) in the Grand Canyon Region, edging second place Bradshaw Mountain by one.

After just missing out on the state tournament in 2017, the Badgers returned last season on the strength of their second place finish in the region. The Badgers had three players on the Arizona Republic’s top 150 2020 prospects (Aaron Greene, Dellin Boyd, and Trey Koehler), the most in the region.

Fun fact: The last two seasons the Badgers tied with Mingus Union for first in the region but lost the head to head tiebreaker both times, at home.