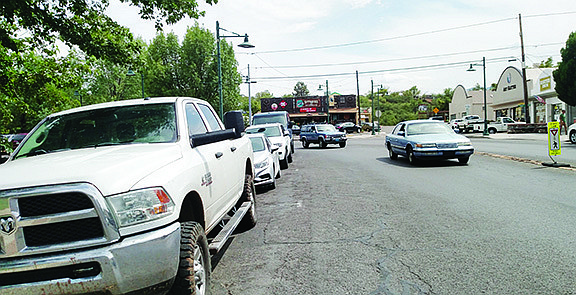 Bids are out now to choose a firm that will re-stripe North Main Street in Cottonwood. The roadway will be reduced from four lanes to two between Mingus Avenue and Seventh Street and front-in diagonal spaces will replace parallel spots in Old Town. VVN / Dan Engler

Cottonwood’s North Main Street has been told it needs to lose some weight — quickly.

That weight, in terms of the number of cars that can be on a stretch of North Main at one time, is set to be reduced by city staff and contractors in the months ahead. A restriping plan will change the flow of traffic in Old Town and along Main between Seventh Street and Mingus Avenue.

Cottonwood Public Works Director and City Engineer Robert Winiecke says a combination of factors have made the changes necessary.

“We have bicyclists and pedestrians in an area where drivers of vehicles tend to speed and try to pass other vehicles,” Winiecke said. “So the goal is to improve overall safety for everyone who travels through or across that corridor.”

The biggest component of the change will be the reduction of Main from four lanes to two lanes from Seventh to Mingus, adding bike lanes on the sides and creating a continuous center left-turn lane.

In Old Town, Main Street will be restriped to have angled parking along the sides, as opposed to parallel spots.

“That aspect (angled parking) will help create about 18 more parking spaces in Old Town, combined with a few other adjustments,” Winiecke said.  Winiecke said the moves will help create more of a uniform look along one of the city’s longest continuous streets. South Main — both the city-maintained sections and the Arizona Department of Transportation-supported State Road 89A section — have a center turn lane, in most spots.

The bicycle lanes will allow riders to get in and out of Old Town without traffic running so closely, and the narrower two lanes, Winiecke said, will hopefully reduce speeds.

“People simply tend to drive with more caution with less space, and faster when things are wide open,” he said.

Winiecke said the two-lane aspect of the change will simply extend how Main already functions as drivers leave Old Town. However, a much bigger adjustment will need to be made by northbound drivers, who must merge from two lanes to one immediately north of Mingus.

“High intensity” crosswalks, that include flashing lights, are also part of the plan. Requirements for roadways are detailed in the Federal Highway Administration’s Manual on Uniform Traffic Control Devices.

There will also be a left turn “pocket lane” striped for northbound Main Street traffic for drivers who are turning left and head south on North Willard Street.

Winiecke said he hoped the center turn lane could have been continued throughout the change area, but the width of Main narrows considerably near Seventh.

Winiecke said the striping project is out for bid at the moment, with the bidding process to be wrapped up by the end of August, with work to begin soon thereafter.

He didn’t want to discuss the estimated budget amounts associated with the project, in order to avoid impacting the bid process, but he said money for the project will come from the city’s general funds.

The permanent “soft signs” seen on South Main are the type that will be used along the center turn lane in the new project.

The angled spaces set to be used in Old Town will allow incoming drives to see brake lights or reverse lights backing up toward them, Winiecke said.

While the idea of back-in spaces in old Town — a style used in cities such as Austin, Texas — was discussed, it was decided that front-in spaces would work better for Cottonwood.

Two entities that partnered with the city in the planning stages of the project, Winiecke said, were the local cycling community and the Yavapai County Public Health Department.

There is no new paving associated with the project. The might be some minor spot repairs to surfaces; Winiecke said since one purpose of the project is to make North Main more appealing to cyclists, it will be imperative to create uniform, even bike lanes.

Work is intended to be completed in the early fall, before cold temperatures arrive that are not conducive to street-striping.

The cycling improvements could help Cottonwood a “Silver” status with the League of American Bicyclists. Cottonwood has been a “bronze” city since at least spring 2016; Sedona, Mesa and Flagstaff are the LAB’s only “silver” cities in Arizona.