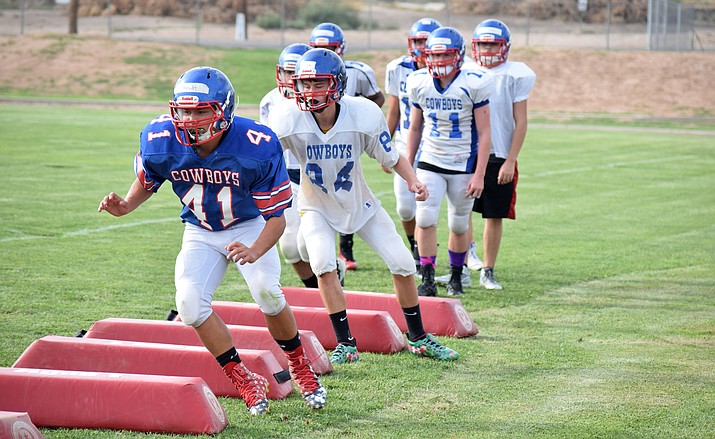 Camp Verde High football will enjoy the figurative homefield advantage in the Verde Region, but winning it may be akin to swimming upstream.

“The schedule’s the same as last year; just reversed,” CV head coach Rick Walsworth said. “We gotta worry about ourselves, we can’t worry about the schedule. The schedule is what it is.”

Walsworth expects the Verde Region to be tough again. Last year two of the five teams made the state tournament and one just missed out.

“It looks about the same as last year I think,” Walsworth said. “There were two teams that made the playoffs last year. I think there was a third one that was the first team out, so there’s three guys we got to catch Tonopah, Trivium and Parker because they all played each other really close last season.”

The Verde Region was launched last year to try and make the 2A more balanced. It is named for a river in Arizona like the other 2A regions: Little Colorado, Black, San Pedro, Agua Fria, Salt and Gila.

The Cowboys play four road games and start the season on Aug. 30, a week later than many teams nowadays. Both their rivalry games will be at home, Chino Valley on Sept. 13 and Sedona Red Rock on Sept. 27.

Again the Cowboys will have a bye in Week 10. They originally would have played Joy Christian, but since the schedules were initially done, that school dropped football, left the AIA and rebranded as Dream City Christian.

It was too hard to add a game in the last week in the middle of two-year scheduling cycle.

“The only real options we had was to add a Zero Week, which is an early game, and with the way the numbers in the program had been in the past, that was gonna be a dicey thing, to add an early game and have enough kids cleared and ready to go and play by that week,” Walsworth said. “There aren’t a lot of options to add for Week 10.”

Last year the Spartans scored 10 points in the second quarter and then six in the fourth to hold off the Cowboys’ rally. They opened last season with three straight wins, two on the road.

Fun fact: Although in different regions, the Cowboys will be meeting the Spartans for the fourth year in a row after scrimmaging them in 2017 and 2016.

The Heroes went winless in their first AIA campaign. Their last win came against Surprise Imagine Prep on Oct. 27, 2017.

After starting the year 3-1, the Cougars went 1-5 the rest of the way. The Cougars have won the Bronze Boot three times in a row against their smaller rival. Camp Verde won it in 2015, the first time it was awarded.

The Griffins finished at the bottom of the Verde Region last year. Their only win was 40-21 at Sedona Red Rock

Fun fact: Glendale Prep is in three different regions: Verde in football, Central in volleyball, basketball, baseball and softball and 3A Metro North in soccer.

Although their overall regular season record last year was 6-3, they went 5-1 against the 2A, losing 3A Wickenburg and to Needles (Calif.). Last season was the Broncs’ first playoff appearance since 2014.

Fun fact: In 2015 KPNX in Phoenix named The Phoenix as one of the best nicknames in the state; makes sense.

The inaugural Verde Region champions went 9-0 in the regular season but got upset in the second round of the playoffs 47-7 by seventh seeded St. Johns. Last season was their first in 11-man football as they moved up from 1A, where they reached the state quarterfinals in 2017.

Fun fact: Trivium football debuted in 2016. How soon until they make the Open Division state tournament?