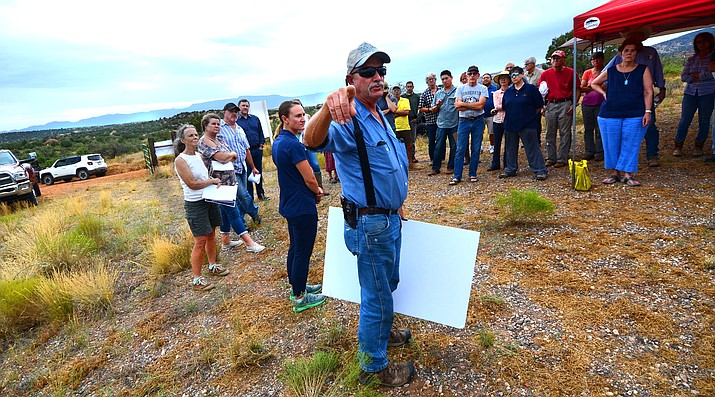 “I am here to beg of you to think about the impact on the land,” said Les Mickle, who said he was neighbor of the proposed glamping property. Caitlan Cullen, who represents Under Canvas, is to the left of Mickle. VVN/Vyto Starinskas

BILL GRAY ROAD — A glamour camping — aka “glamping” — plan to put 125 luxury camping tents in a remote area near the Sycamore Canyon Wilderness brought out 30 to 40 concerned neighbors and residents to the secluded location 11 miles out on Bill Gray Road last week.

“If you walk back there, you see special country, relatively undisturbed, That’s why we all bought out here,” explained Les Mickle, whose property would abut the glamping site. His comment received a round of applause from the onlookers who arrived in cars, trucks and all-terrain vehicles.

“I am here to beg of you to think about the impact on the land,” he continued while holding one up of the glamping company’s maps to the gathering of people.

He pointed to Sycamore Canyon Wilderness across the road, expressing concern that campers would bring ATVs and continue to destroy the area by driving on unmarked roads.

“What about the land? I learned that the Forest Service can’t take care of the land without the public’s help. How are we going to monitor all these different people every day.”

Caitlan Cullen, who represents the Montana-based Under Canvas glamping company, thanked Mickle for his comments and said “We do want to be good stewards of the land.”

“We hope to be good neighbors,” she continued. The 80-acre site includes two acres of development with the priority-designed 125 tents, a main restaurant and a social tent for campers, a main fire area, water and sewer, and gravel roads.

The tents are built on platforms so grading under the tents is not required, she said. The company provides actually mattresses, comforters and pillows to provide for a luxury camping experience, she said.

The biggest gasp from the crowd came when she told them there would be 135 vehicles driving the remote red rock dirt road each day when the camp sites are open.

Cullen said the glamping would be a seasonal operation at this location and only open part of the year.

Cullen invited people to look at one of the other glamping sites the national company operates and how they integrate with those communities.

She said the Under Canvas glamping company was founded by Sarah and Jacob Dusek in 2009 and now has more glamping sites in Montana, Yellowstone, Zion, Moab, Grand Canyon, Glacier, the Smoky Mountain, Utah, and Mount Rushmore.

Right now the project is in conceptual stages, Cullen said. But approval of the project would have to go through a Yavapai County use permit public review process.

Cullen said her company has been working on this for a couple of months. Under Canvas already has had a pre-application meeting with Yavapai County staff, which is a step before making an “official commitment.”

“For whatever reason, if we move off the site in two or three years, the site would go back to nature,” Cullen said. “You wouldn’t even be able to tell we were there.”

Glamping company scales back on plans for Bill Gray Road project
‘Glamping’ plan application withdrawn
Exotic glamping experience is a walk on the wild side
Letter: No thanks to ‘glamping’ on Bill Gray Road
Glamping: Luxury camping comes to Sedona/VOC
Event Calendar