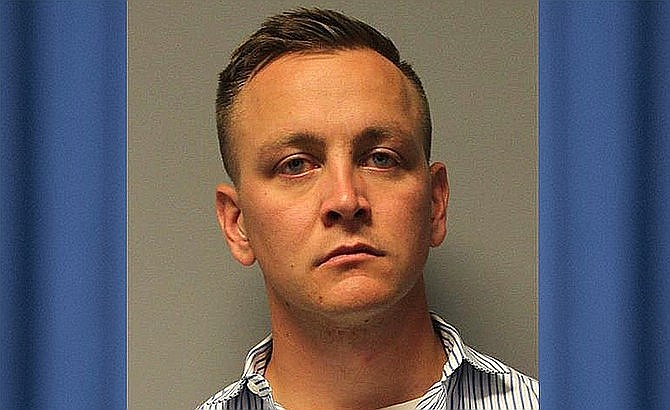 CAMP VERDE — Another hearing date that seemed like it might lead to results left a Cottonwood police officer with still no resolution to his case Monday.

Cody J. Delafuente, whose charges include kidnapping, aggravated assault/impeded breathing, assault with intent to injure/reckless and preventing or interfering with emergency telecommunications in an incident involving his wife, was in Yavapai County Superior Court again Monday for the third time in as many months.

Claiming there might be a strong chance of working out a settlement soon, Delafuente's attorney, Jason Karpel, asked Judge Michael Bluff for a postponement and a settlement conference.

Monday's hearing was the result of Bluff's continuance from a July 8 hearing. It was listed as a "pretrial conference/settlement/change of plea." The settlement conference, requested by Karpel, is now set for Sept. 4 in Superior Court at 1:30 p.m. Karpel also requested that a different judge oversee that court conference, mentioning a "conflict" without going into detail.

At the July 8 hearing, Coconino County Deputy Attorney Eric Ruchensky requested more time for "an investigation about new facts that have recently come to light within the past week." Carpel referenced that investigation as well during Monday's hearing.

Calls to Carpel's Phoenix law firm by the Verde Independent weren't returned as of this writing.

According to court documents, supplemental items disclosed within the past month include an April 2017 Clarkdale Police Department incident report, an incident narrative from a Clarkdale officer, body camera video and a use-of-force report.

Bluff had no objection to Carpel's request for the settlement conference in front of a different judge.

Though the case is being heard in Yavapai County Superior Court, Ruchensky is the assigned prosecutor. He told Bluff that he was willing to discuss a trial date, knowing Bluff's Division 7 has many trials scheduled in the months ahead.

Bluff pointed out that scheduled trials in his courtroom are backed up through at least May 2020.

Ruchensky told the court a plea agreement has been offered to Delafuente, and will only extend the expiration date on the offer through the Sept. 4 settlement conference date.

Delafuente, 28, was a detective with the Cottonwood Police Department when he was arrested in October 2018 following an investigation of domestic violence toward his wife at a home in Clarkdale. He pleaded not guilty soon thereafter, and a series of court hearings has ensued.

Delafuente is still employed by Cottonwood Police, but has since taken on an office role that does not involve the same level of public interaction as a detective typically would have.