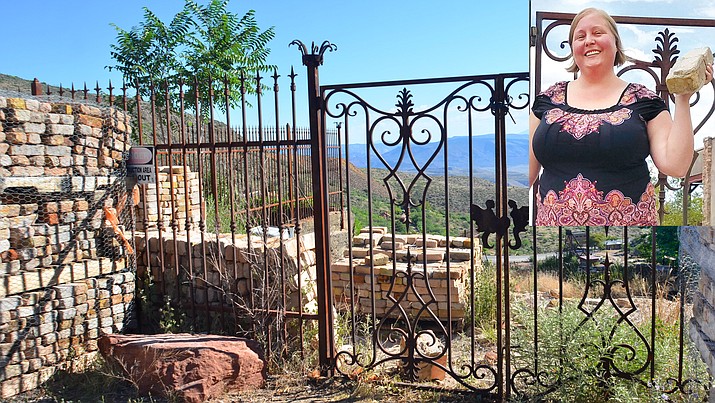 The new owner of the Cuban Queen property, Windy Jones, said she and husband, Josh Lindner, are proposing to rebuild the one-time bordello in the “style” of the original building, even using scraped bricks from the Cuban Queen that collapsed in 2017. Jones said she planned to call it the Cuban Queen Bordello Rooming House if she gains town approval for construction. VVN/Vyto Starinskas

The Jerome Town Council has scheduled a special meeting on Tuesday at 6 p.m. for an executive session to discuss the property of the former Cuban Queen. It will take place before their regular meeting at 7 p.m.

“Council may convene in executive session…” the notice reads, “for the purpose of discussion and consultation for legal advice with the Town Attorney, who may participate telephonically, regarding issues related to the proposed redevelopment of the Cuban Queen.”

The next town meeting scheduled about the Cuban Queen was to be in about 90 days or on Oct. 24 in front of the Jerome Board of Adjustment, after that board tabled a request for six parking permits from the owners recently.

The owners of the property of the former Cuban Queen, Windy Jones and Josh Lindner, are attempting to build a new building on the site that is historically similar to the old Cuban Queen which crumbled into a pile of bricks several years ago.

New buildings in Jerome require parking and a permit must be granted through the town.

Parking permits that were issued to the previous owner of the Cuban Queen were considered not valid, by the town attorney, because the permit required that the reconstruction of the building at the time had to be completed.

So the owners are seeking new parking permits now and the council will be discussing the issue in executive session Tuesday,

Jerome’s new zoning administrator John Knight, said on Monday he would be at the council meeting and has been getting “up-to-speed” on the Cuban Queen.

Knight said he thought the town would have a chance to sit down with the Cuban Queen owners and try to work something out in the next weeks or months.