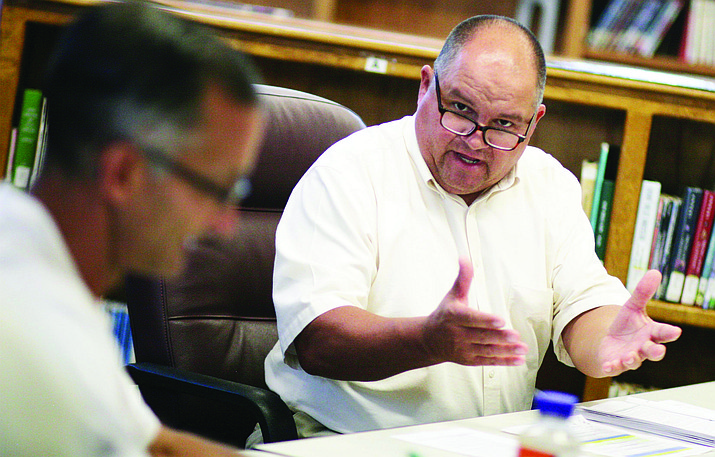 Camp Verde School District Administrator in Charge Danny Howe said, “Things are coming along very well, given the magnitude of what happened to our servers and backup servers” following a late July discovery that the district’s computer system had been hacked. VVN/Bill Helm

CAMP VERDE – Getting the Camp Verde School District’s computer system fully operational again has been like a “neverending cat-and-mouse game.”

That’s the word from Camp Verde school administrator Danny Howe. “Things are coming along very well, given the magnitude of what happened to our servers and backup servers.”

The district discovered July 26 that its technology servers had been hacked, said Howe.

Howe said Thursday he has no idea whether hackers made demands of the district for money. But the district’s payroll went out two weeks ago manually, he said, with pen on paper.

“We didn’t miss any checks to our staff,” Howe said. “We handwrote the checks. But checks released [Friday] will be done normally.”

Paper checks to vendors were also issued,, Howe said. As of Friday, the district’s business department will be able to release checks by computer.

Howe said he’s not sure about ransomware or any demands for digital money because once the district knew it had been hacked, the insurance company was notified.

“It’s been out of our hands,” Howe said. “We didn’t even deal with it. We called the insurance company, asked if we had cyber insurance. They said yes.”

‘Different ways to protect our stuff’

“We have to figure out different ways to protect our stuff,” Howe told the Camp Verde School Board on Tuesday. “But it looks like we have a lot of our information back.”

Howe, who is also the principal at Camp Verde Middle School, told the board that the district is “starting to work on the teachers’ computers.”

Camp Verde High School Principal Mark Showers said Tuesday that one teacher “does PowerPoint presentations on her phone, and others are bringing their laptops to school.”

At Camp Verde Elementary, tasks “such as lunch count, attendance, and bus assignments were taken on paper rosters rather than online,” Principal Jaclyn Campbell said.

Campbell also said the district’s IT department has been fantastic.

“They’ve been working diligently to safely restore the network,” she said. “Our front office and computer lab are up and running again. Teachers and staff will be back online soon as well.”

Neither Howe nor District Business Manager Steve Hicks could say when technology systems would be fully repaired. But Howe told the district’s governing board that the Yavapai County Technology Consortium donated 100 desktop and 50 laptop computers as the district continues to rebuild teachers’ computers.

Howe explained to the board that the district is looking into different ways to have technology stored. One way, Howe said, included backing up data each week.

“That way if it happened again, we’d be behind a week, rather than a month, a year, eight years,” he said.