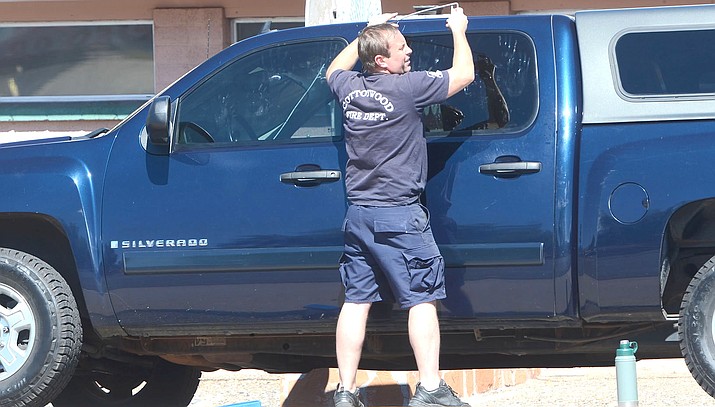 Cottonwood Fire Department firefighters attempt to unlock a truck running with a child locked inside on South Main Street in Cottonwood. A passenger side rear window, on the other side, was smashed to release the child.VVN/Vyto Starinskas

The Cottonwood Fire Department smashed out a rear passenger window of a truck parked on South Main Street on Tuesday afternoon after a child was accidentally locked inside the vehicle as it was running, according to police and fire officials.

There were no arrests. The incident happened in front of a local charter school, according to Cottonwood Police Dept. Sgt. Monica Kuhlt.

Despite afternoon temperatures in Cottonwood soaring past 100 degrees this week, the child was not hurt and taken out of the child seat after the window was broken.

“It looks like the child was accidentally locked inside of the vehicle while it was running,” according to Kuhlt.

According to weatherunderground.com, Verde Valley temperatures are forecast to be between 101 and 106 through Aug. 22.

The chief said the fire department has tools to get into locked cars. With an air conditioning running, Kuykendall said the first option is to use these specialty tools to try and open the vehicle.

Tuesday, fire crews were unsuccessful gaining access to the vehicle that way, so they had to break the rear passenger window.

“Child was unhurt,” the chief said.

“It’s never a good idea to leave your kids in the car,” the chief said, especially if it’s running. A parent may lock the keys in the car, or the toddler may get out of the car seat and put the car in gear, he said.

Don’t leave pets in a car either, the chief warned.

Accidents happen and everyone locks their keys in the car at one time or another, Kuykendall pointed out. The difference is when people intentionally go into the store and leave the car unattended with children in the car, he added.

“Never leave a kid in the car,” Kuykendall repeated.