Native American history in D.C. more than just a museum 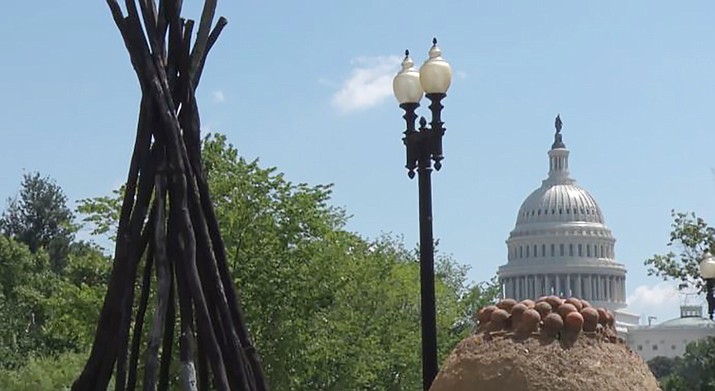 Outside the National Museum of the American Indian in Washington, a teepee frame shares some of the skyline with the Capitol dome. Cronkite News photo Julian Paras

WASHINGTON, D.C. — Washington is full of popular tourist sites that are monuments to American history, from the White House to the Capitol, from Arlington National Cemetery to Congressional Cemetery.

And, with a little more exploring, visitors can learn that all those sites are monuments to Native American history in Arizona as well.

The National Museum of the American Indian may be the first – and possibly only – site that comes up with an internet search for “Native American landmarks” in Washington.

A new app opens the door to a range of other sites.

The “Guide to Indigenous DC” takes users on a tour of D.C. sites that link to Native American prehistory all the way to modern history.

“Working on this app, learning more about the history of indigenous people in the D.C. area has been an honor to work on this project,” said Elizabeth Rule, assistant director for the AT&T Center for Indigenous Politics and Policy at George Washington University.

The center developed the app, unveiled this summer, after soliciting proposals for ways to tell indigenous history.

Some of the sites are obvious, like the National Museum of the American Indian and the statues of tribal leaders in the Capitol. Others include the iconic Iwo Jima Memorial, where one of the five Marines raising the flag in the sculpture is Ira Hayes, a Pima Indian from Arizona.

The sites stem from prehistory, noting that tribal artifacts were unearthed on the White House grounds when a swimming pool was installed in 1975, to more modern history.

The 1972 occupation of the Bureau of Indian Affairs by Native activists is included along with Congressional Cemetery, which is now home to three Lummi totem poles carved to honor the victims and heal the nation in the wake of the 9/11 attacks.

Kristine Witherspoon, a tourist from Georgia who was visiting the National Museum of the American Indian this summer, said that as a mom of 8- and 11-year-old kids she would like to have something like the app to help guide them.

“I felt that while exploring the nation’s capital, it’s important to start here first because I think we often sanitize the way that our country was founded,” she said as she stood outside the museum.

“We forget about the past and the origins of all the cultures that were here,” Witherspoon said. “We need to get a lot of things right … we need to engage our young people on the true history of Native people and what they endured here.”

Her friend Tina Kite said she thinks the app would be handy for visitors like her.

“You could definitely explore more, and it could save you time than just Googling to try and find information,” Kite said. “That would be very helpful.”

David Bledsoe, marketing manager for the American Indian College Fund, which helped fund Indigenous D.C., said the project was attractive because it “raised awareness of Native students, their vibrancy, their essential role within higher education.”

While the app is focused on D.C., Bledsoe hopes it can eventually be used in schools nationwide.

“We see that as a way that we’ll continue to invest in how Natives are seen in this space,” he said. 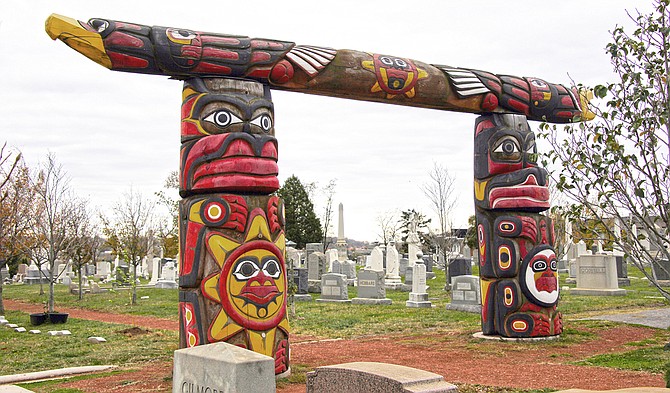 Congressional Cemetery might not be the first place to look for Native American sites in Washington, but it’s the final home for three Lummi totem poles carved to honor the victims and heal the nation in the wake of the 9/11 attacks. Creative Commons photo/Tim Evanson