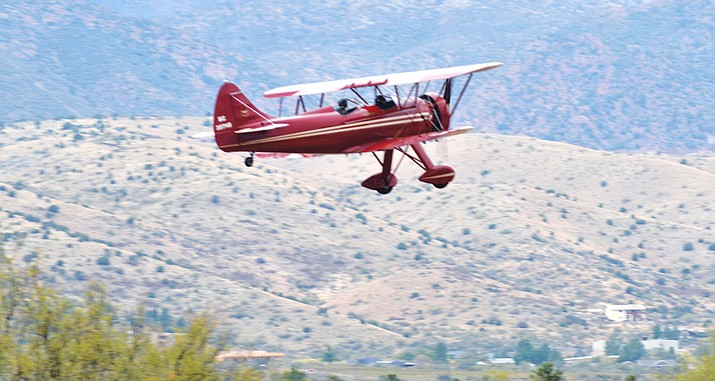 Tuesday's public work session at the Cottonwood Recreation Center was an opportunity for a Cottonwood city official to make a presentation on behalf of a volunteer commission regarding airport noise — and for the public to provide feedback.

The Cottonwood Council heard from City of Cottonwood Project Manager Morgan Scott, who presented the main points of recommendations in a 10-page draft from the Cottonwood Airport Commission and city staff to help mitigate airport noise.

The report was about one year in the making and will be used in the months ahead in both composing a new airport master plan and in all monthly Airport Commission meetings as a list of ongoing goals.

The City of Cottonwood staff and the Commission worked on the 10-page report together.

One clarification Scott made Tuesday, in his presentation, was regarding the first item on a list of recommendations the Verde Independent published as part of a work session preview in the Aug. 3 print edition. Even though the recommendations in the commission's draft report states the airport should "support" area flight schools, no airport that accepts federal funding really has this choice; accommodating training flights is part of compliance.

Cottonwood has not been actively promoting its airport as a training facility; its location seems to have brought many flight schools to the city's airport naturally. The airport takes in less than 2 percent of training flights based at the Prescott Airport — the 35th busiest airport in the nation — and also hosts some training flights from Deer Valley Airport in Phoenix.

Scott said another training school recently relocated from Oregon to the Prescott area, specializing in training pilots to fly into rural areas with short runways. The school, whose aircraft tend to be of the more noisy variety, are actively searching for short, dirt airstips to land on in the area, but the Cottonwood Airport has none, and the rest in the Verde Valley are all privately owned.

A draft copy on the report has been posted to the city's website: http://cottonwoodaz.gov/DocumentCenter/View/2934/Staff-report-City-Council-Airport-Noise-Action-plan-2019-8-13--FINAL-updated-2019-7-30

A video of Tuesday's meeting can be viewed on the youtube.com channel "Cottonwood Council Regular Meetings."

The FAA restricts municipalities from formally regulating aircraft and aircraft noise. There are, however, a few aspects where suggestions might reduce the impact of noise on neighborhoods near Cottonwood Airport.

Scott said the recommendations will be mostly for ideal flying conditions, which change with the weather and with the seasons.

He said the commission rejected suggestions that would have simply moved noise to another equally populated part of the Cottonwood area, or would create collision points and major safety concerns in the air.

Some of the concerns raised by the public at the meeting included concerns over the makeup of the five-person Commission, which includes four pilots; concerns about crashes where there are structures and concentrated flights and low-altitude flying.

Scott said during the summer of 2018, when the Prescott Airport was having work done on one of its runways, increased the amount and changed the type of traffic at Cottonwood's airport for about a month.

Pamela St. Germaine, who lives north of the airport, in the main takeoff path for aircraft during calm conditions, said on a recent Sunday morning, about 60 takeoffs within one hour led to near-constant engine noise.

Clarkdale residents came to the meeting to address noise and low flying as well.

Mayor Tim Elinski asked Scott about the possibility of an off-site, remote dirt landing strip attached, organizationally, to Cottonwood Airport. Scott said the FAA only funds projects and other needs detailed in each airport's master plan.

While Cottonwood might not necessarily make an intense push for such a landing strip, the frequency of mention of dirt training strips in various Arizona airport master plans increases the likelihood the FAA would consider funding that need somewhere in the region.