Fire causes weekday delay along I-17 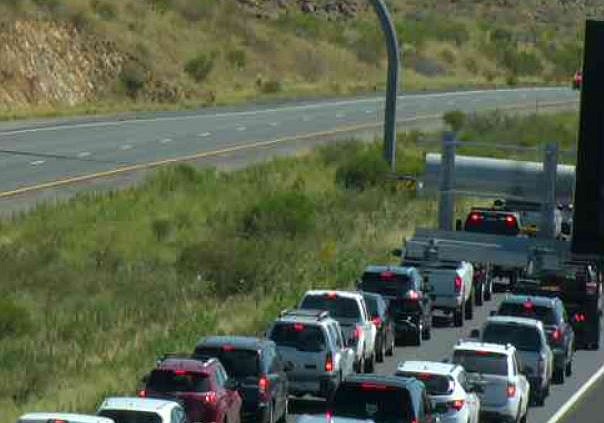 Arizona Depart of Transportation traffic cameras captured some delays near mile marker 254 on Friday afternoon, where a fire in the Bumble Bee area, north of Sunset Point. Courtesy of ADOT

COTTONWOOD – A fire burning in the Bumble Bee area affected traffic along Interstate 17 in both directions Friday afternoon.

At one point, southbound I-17 was down to one lane near exit 254, north of Sunset Point. Drivers were encouraged to exit at Camp Verde and take State Roads 260 and 87, through Payson, as an alternate route to the Phoenix area.

The ADOT tweeted that the lane closure had ended and the interstate is passable. However, drivers should give themselves extra time traveling north or south on I-17.

Fires are not always a frequent occurrence in Arizona in August, but the monsoon season hasn’t begun in earnest in many lower- and mid-level elevations in the state.

Long backup on I-17 northbound out of the Valley after vehicle fire
I-17 reopens near Sunset Point
I-17 sign alerts motorists on best travel times to Sedona
ADOT lowering I-17 speed limits during peak holiday travel periods
ADOT: Drivers key to reducing I-17 crashes north of Phoenix