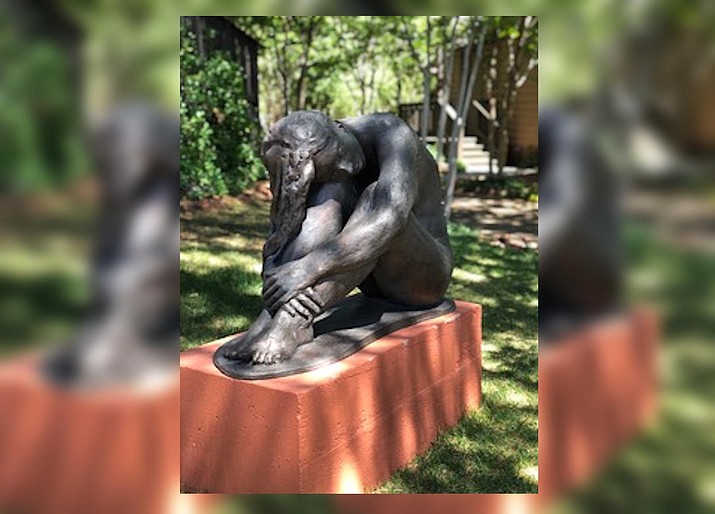 As the glorious days of August unfold Goldenstein Gallery’s enchanting Summer Art Series continues this week with the third of four exclusive tours of the Waddell Sculpture Ranch.

Filled with lively events and delightful opportunities to connect with art and artists, the Summer Art Series is designed to stir all of the senses. Outdoor sculpture throughout Sedona and art that brings nature inside to us, both beautiful paintings and sculpture, are featured throughout the series.

John and his wife, Ruth Waddell, offer seven decades of art perspective. These tours are a rare opportunity to experience the evolution of both art and the artists firsthand in the special environment they have created.

Surrounded by patches of trees against the sublime backdrop of the natural landscape the essence their ranch evokes is a remarkable sense of inspirational peace.

Waddell’s illustrious sculptures are reflective to the planes of the natural world that surround creating a magical sense of stillness that bubbles with life.

Space is limited for this special event, please contact Goldenstein Gallery to reserve your spot.

Ruth Waddell began drawing and painting early in life and attended the Art Institute in Chicago.

She says she “began again at square one” when she returned to making her own art in 1996. Inspired by people and nature, her work poignantly captures the ephemeral nature of our existence.

She states: “In beginning each new painting, pastel, drawing or sculpture there is more unknown than known. My wish is to deliver the emotional impact that the subject has on me. In the process, I inevitably discover more about the subject and its environment as I work.”

Though she works in multiple mediums, her pastel work has been her recent focus. Full of vibrancy and softness, her art is reminiscent of both Van Gogh and Renoir but with a distinctive flavor that reflects her unique life experience.

Internationally renowned for his bronze nudes depicting the human form, John Waddell’s sculpture has had a dramatic impact over seven decades on communities and has opened hearts and minds.

“My work is a strong statement regarding civil rights and the necessity for men and women of different beliefs to understand and revere each other.” Waddell states “I try to go beyond temporal and conventional form to greater variety, more universal, more human.”

A turning point in his art and philosophy was caused by the tragic 1963 Birmingham, Alabama church bombing. Four young girls were killed when a bomb exploded at the 16th Street Baptist Church. This church was a meeting place for civil rights leaders. All four men linked to the bombing belonged to the Ku Klux Klan.

Waddell felt something had to be done, to be said. As a sculptor, it would be through his art. He would retaliate with peace.

Over the next 15 months, 19 women from the surrounding community came to pose for Waddell and his sculptural eulogy to the four little girls - the work that would come to be titled, ”That Which Might Have Been, Birmingham, 1963.”

These four poignant sculptures represent the girls had they grown to womanhood. They are on permanent display at the Unitarian Church in Phoenix and the George Washington Carver Museum and Cultural Center in Phoenix.

In 1964-1967 Waddell and his family moved to Greece with a commission to create the public sculpture “Family.”

As Waddell’s work continued, the need for creative serenity took him away from America’s art centers and deeper into the remote Southwest landscape. Here he built a magnificent studio. Apprentices came from all over the world to study with Waddell.

Waddell entered what would be the most prolific period of his life. He has sculpted over 150 life size and small bronze figurative sculptures, as well as paintings and drawings.

In 1984, a devastating fire burned his studio, sketchbooks, paintings, the family home and plaster molds that would have made multiple castings of his work possible – were destroyed.