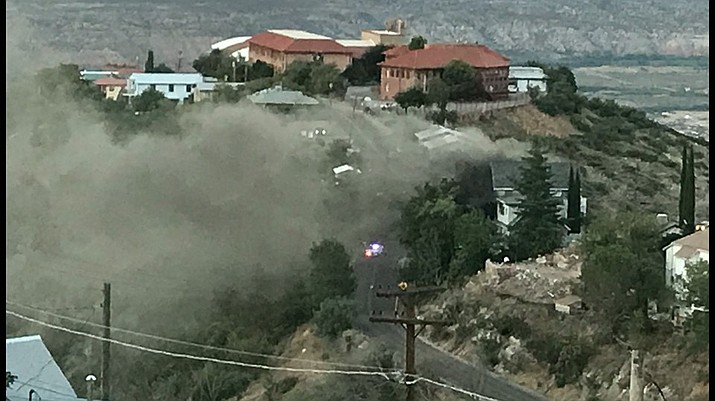 A house on Jerome’s East Avenue, on a ridge known as the “hogback,” which runs along SR89A, caught on fire Friday evening. The old Jerome HIgh School is in the background. Photo by Suzy Mound

JEROME — Smoke could be seen billowing throughout Jerome from a three-story house Friday night as firefighters arrived to the put out the fire.

Jerome Fire Chief said they were lucky to save the structure on East Avenue, also known as the “hogback” because the houses sit on a ridge along SR89a.

The occupants were in the home, heard a pop, and evacuated.

The occupants and one cat made it out of the house uninjured, Blair said, but one cat was killed in the fire.

The chief said a call came in at about 6 p.m. Jerome Fire arrived to find heavy smoke rolling out the front door.

The fire turned out to be only in the basement, he said.

“The flame was all down below,” Blair said.

The cause is still undetermined and under investigation, he added.

It took between a half-hour and 45 minutes to knock the fire down and get it under control, Blair said.

The mutual response allowed Blair to rotate in crews and mop up.

Blair said he could not estimate the heavy smoke and water damage, but it would most likely need to be re-sheet rocked and have electrical redone.

“The structure itself is intact,” he said, adding that it’s a three-story house with a split-level.