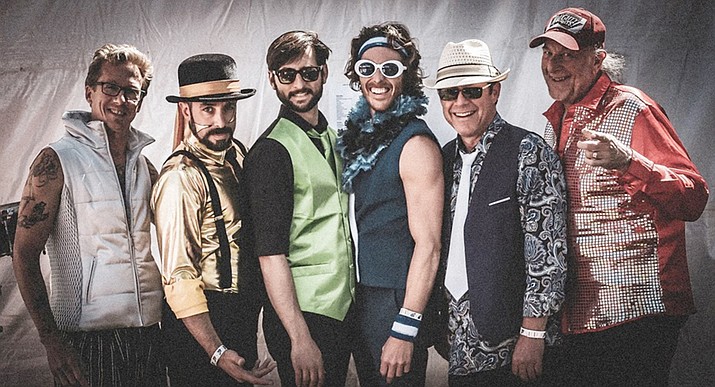 The event begins at 2 p.m. and runs with live entertainment, pot-luck pickings and raffles through 11 p.m. Dan Rice and friends take the afternoon music shift, then the popular Naughty Bits appear from 7 p.m on.

Spawned from a band featuring audacious appearance and an unusual playlist, the Naughty Bits remain a bit Yin Yan and Zen Some.

Like a balloon that expands and contracts in different places at unexpected times, this group takes full advantage of its horn section.

Uncle Mark Bolin’s trombone magic has been a Sedona gem for decades. His licks play a key role in giving the band a platform from which to be unapologetically bawdy. They are prone to dress the part, as well.

Apart from the splashy presentation, these guys come together musically with precision and spot-on dynamics. Notions of the earlier signs of near chaos meld into a remarkably tight show. In addition, great dance music comes standard.

Covering drums, guitars and trombone are Uncle Marc Wolin, Lou Moretti, Dylan and Mike Jung, and Jason Vargo. Besides pubs and dance scenes, they are frequently on the bill at key regional events and venues like the Sedona Food Truck Festival and Flagstaff’s Orpheum Theater. And now, the Old Corral.

The Old Corral is located at 11375 E Cornville Road in Cornville.