From sea to shining sea for US veterans
71-year-old walking 3,400-miles to raise awareness for America’s veterans 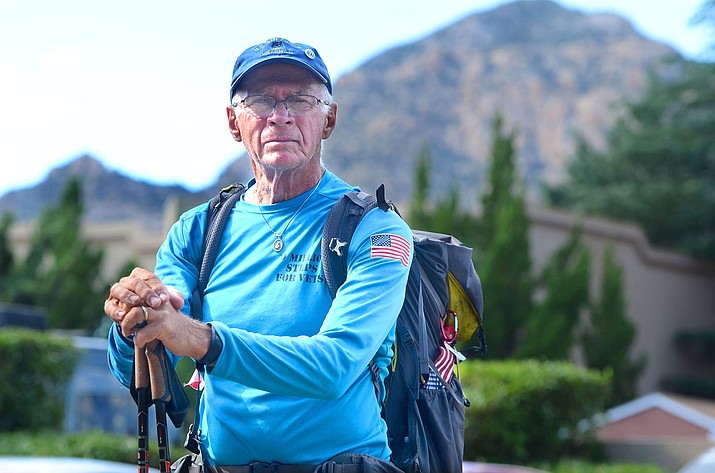 William Shuttleworth, 71, stops for a moment during his pass through the Verde Valley this week. Sedona represented the two-thirds mark of Shuttleworth’s 3,400-mile, cross-country walk to raise awareness for America’s veterans. VVN/Vyto Starinskas

SEDONA — William Shuttleworth, 71, walked down the shoulder-less highway in Oak Creek Canyon on Friday morning as temperatures hovered around 100 degrees.

Friday night, Shuttleworth met with local veterans at the Elks Lodge and Saturday morning was up at daybreak walking through Cottonwood to Jerome and to San Diego.

Shuttleworth said he walked out the front door of his home in Newburyport, Mass., on May 15, and has worn four pairs of shoes down to “a frazzle.”

Altra Running Shoes are providing Shuttleworth shoes and generous people are providing him places to stay on mission, he said. He is averaging about 29-miles per day and his longest was 52 miles.

In Sedona, the manager of the Sedona Springs Resort saw his story on social media and offered him a place to stay.

“The idea to raise awareness and advocacy” for veterans, Shuttleworth said. This includes help for homeless vets, more mental services, health care, suicide treatment, and he would like to see more vets in Congress.

“One of the things I try to do is get up ‘wicked’ early to get out of here,” Shuttleworth said revealing his Eastern accent. “Today I left about 3:30 in the morning,” when he walked from Flagtsaff to Sedona.

Shuttleworth said he has a “guardian angel” (a friend) who reaches out and contacts the press and reaches out to people for him to stay with.

He said since this has become a national story, many people have stepped up and want to be part of this cause for veterans. The rooms are gifted, but he has a tent in his backpack and is prepared to camp.

Shuttleworth has also set up a GoFundMe page and has raised $51,000 of a $100,000 goal which will be used to support Disabled Veterans of American. But he said it’s not about him, but what he is trying to do.

His wife Patty remained in Newburyport and Shuttleworth walks alone - except for the many locals who join him while he is walking through their towns.

One day he was coming into Rushville, Ill., Shuttleworth said, and he met up with about nine “boys” from the Army National Guard.

As he got closer to town, he saw police vehicles, sheriff’s vehicles and Army vehicles.

“By the time we got to town, it was a whole damn parade, with kids with bicycles and everything.”

The parade circled the town and ended in the Masonic Temple for a “lovely dinner,” Shuttleworth said. “It was spectacular.”