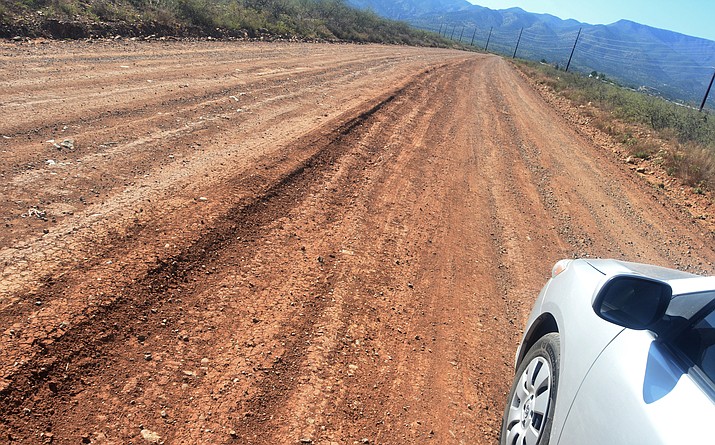 Wednesday, the Yavapai County Board of Supervisors will consider $1.17 million in road improvements on Ogden Ranch Road from Camino Real to SR 260. VVN/Bill Helm

Wednesday, the Yavapai County Board of Supervisors are expected to award a $1.05 million contract for improvements to Ogden Ranch Road from old SR 279 to SR 260.

The supervisors will meet at 9 a.m. Wednesday, Aug. 21, at the county’s Administrative Services Verde Valley complex, located at 10 S. 6th St. in Cottonwood.

The contract, which would go to low-bidder Paveco, Inc., would be part of $1.17 million investment by the county for road work, design services and quality assurance testing of the 1.1-mile “unpaved, infrequently-maintained roadway,” according to the supervisors’ Aug. 21 agenda packet.

Once paved, Ogden Ranch Road would provide “improved connectivity from the southwest portion of Verde Village and the developments along Camino Real (old SR 279) to SR 260,” the agenda packet stated.

The Ogden Ranch Road improvement project, said District 3 Supervisor Randy Garrison, is “one that people have been asking about for a long time.”

According to the agenda packet, Ogden Ranch Road “has been identified in past Verde Valley transportation plans, as well as the Regional Roads Program five-year plan as an important improvement to assist with regional traffic flow near Verde Village and the southwest portion of the City of Cottonwood.”

The $1,050,336 contract is one of three Ogden Ranch Road financial commitments that supervisors are expected to approve Wednesday.

The others are $24,930 for quality assurance testing on the overlay, and a $95,598 design services contract with Kimley-Horn and Associates.

The agenda packet also stated that an Intergovernmental Agreement between Yavapai County and the City of Cottonwood will be brought to the supervisors and Cottonwood City Council in the near future to outline the construction and ongoing maintenance responsibilities.

“Public Works has discussed this project with Prescott National Forest staff and received support for the improved connectivity in the area,” the agenda packet stated.

“But this design contract, if approved, will allow the project to move forward in the interim,” the agenda packet stated.

“This is one of those roads that’s part of the regional transportation study,” Garrison said. “Like the Verde Connect project, this would be a significant improvement to the SR 260 corridor. It would alleviate some of that congestion into Cottonwood.”

The road, when paved, would be a two-lane road, Garrison said.

Yavapai County can distribute an additional $431,084.14 into individual funds controlled by its Superior Court, county attorney, and public defender offices.

Known as fill-the-gap monies, Yavapai County’s superior court, clerk of the court and justice courts collected more money in fiscal year 2018-2019 than the base year collections in fiscal year 1997-1998, according to the Supervisors’ agenda packet.

This, according to Arizona Revised Statute 41-2421, means that the extra money can be distributed and used by the county’s court system.

According to the Supervisors’ agenda packet, the fill-the-gap money originates from a 5% deduction applied to total court revenues collected, but excluding restitution, child support, bonds and Clean Election Fund surcharges.

The 5% is deposited into a fill-the-gap set-aside fund in the Yavapai County Treasury, and then distributed annually.

Also Wednesday, County Supervisors are expected to approve the appointment of Rick Thomsen as the new Deputy County Zoning Inspector.

According to the Supervisors’ agenda packet, Thomsen is currently in training in this position, and is based in the Cottonwood Development Services office.

A copy of the agenda can be found at destinyhosted.com/agenda_publish.cfm?id=92827.