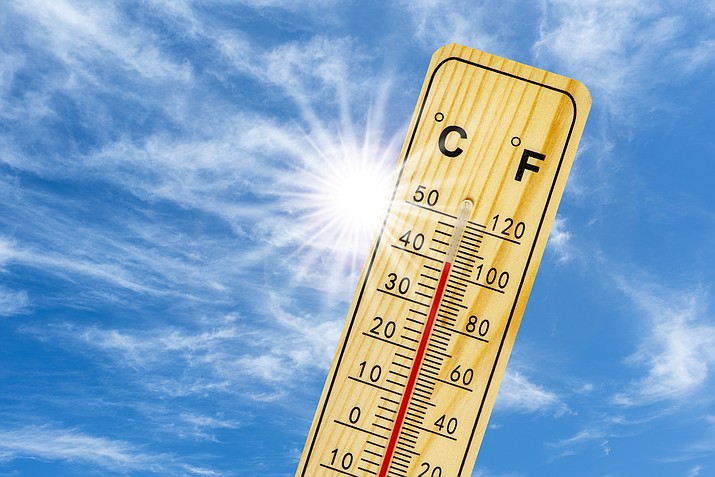 The Verde Valley and much of the rest of Arizona is not on Mother Nature's good side so far this summer -- though that could change with only one or two storms, according to a National Weather Service meteorologist.

Emily Thornton said Monday that most of the state is far behind on rain totals this summer. So far behind, in fact, that if the present total stands through the end of the traditional monsoon season, it would be one of the driest seasons since totals were first tracked.

"So far, it's one of the driest seasons ever for most places in the state, going back to 1900," Thornton said. "But if precipitation gets going, with the big rain we often get, some places catch up to their whole seasonal total in one day."

An excessive heat warning was in place for the Verde Valley from 10 a.m. Tuesday through 8 p.m. Wednesday.

Wednesday's forecast high in Camp Verde is 107 degree, with an 11-mph wind unlikely to cool things down much. Even Sedona and Jerome -- often several degrees cooler than Camp Verde -- are set to hit 100 on Wednesday.

There is a 20-percent chance of rain in Cottonwood for five days in a row -- Wednesday through Monday. The high forecast for Friday is 99, but Cottonwood could break the century barrier all other days through Wednesday, Aug. 28.

"The pattern for the weekend is more favorable to rain," Thornton said. "But there really are no clear signals."

The Verde Valley got some rain in July, but not in a way that kept monsoon season going. Thornton said high pressure has been hovering over most of Arizona for most of the past several weeks.

"It broke up a bit over the Four Corners area, but over most of the state, the high pressure's just been sitting there," Thornton said.

According to farmersalmanac.com,a heatwave occurs when a system of high atmospheric pressure moves into an area and lasts two or more days. In such a high-pressure system -- such as what Arizona's had going for several weeks -- air from upper levels of our atmosphere is pulled toward the ground, where it becomes compressed and increases in temperature.

Thornton said there have been a few parts of the eastern part of the state that have received some rainfall. However, most of Arizona, regardless of elevation, is in the same situation as the Verde Valley.

Thornton said there are examples of how only a few rain events can help a town or city or area keep pace, on paper. For example, Chino Valley isn't far off pace for a normal monsoon season, thanks to a handful of storms, but that's likely not impressive to farmers or ranchers in that area.

Thornton said the way the past 12 months have gone, overall, have kept the summer from being a bigger red flag to those who track aspects such as fire conditions.

"It was a really wet winter and spring, so that helped," she said.

When asked if global warming is discussed more frequently by meteorologists during long, hot dry spells, she said such sets of data are part of a much bigger picture.

"One season's data, by itself, for one region, is not enough to tie to a global trend," Thornton said.