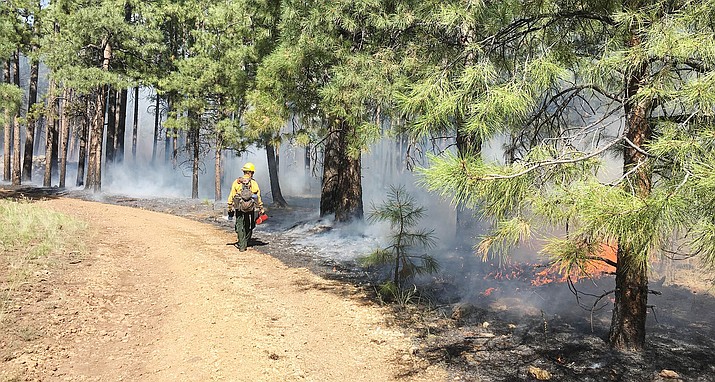 The Sedona Fire District has suspended all issued burn permits for the burning of yard debris “due to the continued unseasonably hot weather and lack of monsoonal moisture." File photo

Here is a recap of some wildfires burning in northern Arizona as of Tuesday morning:

FLAGSTAFF — As of 7 a.m. Tuesday, the Saber Fire has grown to 1,550 acres, according to a report on the Incident Information System website InciWeb.

The Saber Fire is located 12 miles northwest of Sedona near Turkey Butte Lookout. The lightning-caused fire was first reported at about 4:45 p.m. Friday, Aug. 2 and currently has 80 fire-fighting personnel managing the blaze.

Current weather concerns according to InciWeb are “hot and windy conditions through the weekend” and “a high-pressure system with some moisture and higher winds likely later next week.”

InciWeb also reports that “fire managers on the Coconino National Forest have determined that the fire will benefit the ecosystem as it moves across the landscape naturally consuming dense forest fuels.”

Saber Fire is being categorized as a type 3-wildfire.

PRESCOTT — The fire area closure order in effect over the Sheridan Fire area is extremely important for firefighter and public safety, Prescott National Forest stated Monday in a press release.

“Firefighters and forest officials have been working closely with area permittees for access as needed, but we continue to see non-authorized individuals in the closure area,” the release stated.

A map and detailed description of the closure area is available at inciweb.nwcg.gov/incident/6522 and at fs.usda.gov/prescott.

The Sheridan Fire started on Aug. 5 and was caused by lightning strike 23 miles Northwest of Prescott on the Chino Valley District. The fire has grown to 2,380 acres as of Monday, Aug. 19, the press release stated.

According to the release, the fire continues to move steadily across the landscape in a remote and rural area south of the Camp Wood Road, and northwest of Willow Spring in the Sheridan Mountain area.

There are no homes or structures threatened, the release also stated. But the fire’s smoke will continue to be visible from Prescott and the Tri-City area during mid-afternoon and into the evening hours, extending as far north of the general fire area relative to the predominant wind direction.

“With smoke impacts continuing to be expected, we recommend that the public plan activities during the earlier part of the day,” the release stated. “For those more sensitive to smoke, we also recommend staying indoors with windows and doors closed and bringing pets inside.”

PRESCOTT — As of Monday, there was little active fire behavior on the Pemberton Fire “with just some isolated flaming of juniper trees and brush,” the Prescott National Forest said in an Aug. 19 press release.

According to the release, the Aug. 19 update “will be the final update on the Pemberton Fire unless there is a change in the current situation.”

“There will be no more ignitions applied to the fire and remaining crews will continue to patrol and monitor along established control lines,” the release stated. “There may continue to be some smoke from the fire for several days as fire in the interior encounters unburned fuel, but smoke should generally dissipate quickly.”

Due to smoke impacts and the continued presence of firefighters and equipment, the Prescott National Forest urges drivers to use caution along roadways.

As of Monday, the Pemberton Fire, located 13 miles northwest of Prescott on the Chino Valley District, had grown to 1,173 acres. The fire started on Aug. 6 due to lightning.

More information is available at fs.usda.gov/prescott and inciweb.nwcg.gov/incident/6521, as well as the forest’s Twitter and Facebook pages.

WILLIAMS — Although the Boulin Fire is moving steadily “as warm weather influences fire behavior,” the fire is now 30 percent contained, according to a Kaibab National Forest press release from Monday.

Relief from smoke impacts will be forthcoming as this incident nears completion, Kaibab National Forest reported.