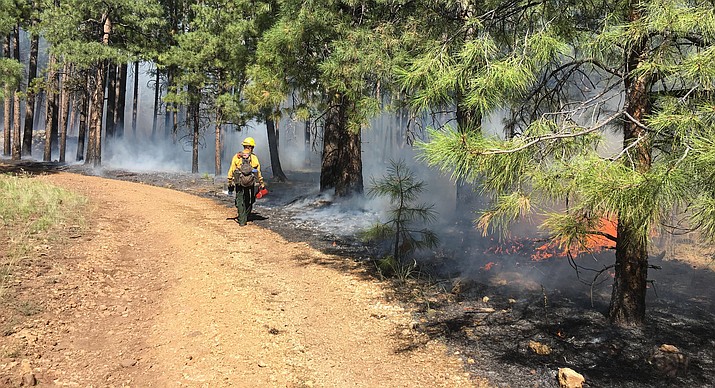 The Sedona Fire District has suspended all issued burn permits for the burning of yard debris “due to the continued unseasonably hot weather and lack of monsoonal moisture." File photo

The complaints are so predictable this time of year.

Social media pundits are ablaze this week with comments about the resulting smoke that has inundated the Verde Valley from the Saber Fire north of Sedona and Sheridan Fire in the Chino Valley area.

“Put it out already. The smoke is a health hazard.”

Easier said than done. Extinguishing a wildfire in rain-starved Arizona during triple-digit summer heat is a much more complex operation than simply “putting it out already.” Often, such operations have fire professionals doing damage control by creating a fire-safe perimeter around the fire and then letting the blaze burn itself out.

That’s what is happening this week with both the Saber and Sheridan fires. It’s a fire management decision that is the ultimate no-win for the agencies in charge of combatting such blazes. For example, fire managers on the Coconino National Forest have determined that the Saber Fire will best benefit the ecosystem as it moves across the landscape naturally consuming dense forest fuels. The same is true with the Sheridan Fire in order to “improve wildlife habitat and restore more open forest understory with grasses and forbs,” according to the Prescott National Forest.

The result of such decisions is the dense smoke we are seeing in the Verde Valley this week. At the very least, it is an annoyance. At worst, it’s a legitimate health threat to the most vulnerable in our community.

But it’s important to distinguish that “letting it burn” is something of a misnomer. Creating a safe perimeter and allowing the fire to follow its natural path is often the best and safest course of action.

Allowing a fire to burn itself out is a more aggressive approach than actually “fighting the fire.” Further, it’s often the smartest way to save us from a more devastating fire – and an even worse situation with smoke – in the future.

As those who lived in Arizona during the Rodeo-Chediski and Wallow fires can attest, the smoke we are experiencing this week in the Verde Valley is akin to clear skies when compared to what we experienced from those two infernos. Their epicenters were hundreds of miles from the Verde Valley, and still the smoke was so thick locally that you could barely see across the street.

More than anything, it’s important to remember that the regional fires we are now confronting are in the capable hands of fire professionals, emphasis on professionals. We employ them not just to fight these fires, but also to make the wisest long-term decisions on how a fire should best be managed. We need to trust them to do that.

Finally, it’s best to remember that fires such as these come with the territory when you choose to live in Arizona.

It’s hot out there and the landscape is a tinderbox.