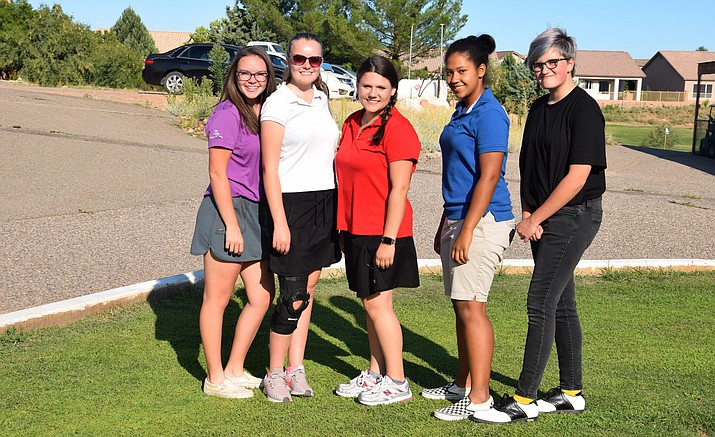 Mingus Union girls golf has a new head coach but the class of 2021 still leads the way.

After practicing for a little over a week and a half the Marauders open the season on Friday at 3 p.m. when they host Prescott at Agave Highlands

“We don’t have a ton of time to get prepared but I think they’re going to do a fantastic job,” Mingus head coach Christian Fuller said.

In its third season Mingus Union girls golf features three juniors, one sophomore and one freshman, as of Wednesday.

“It’s nice to see that our program is still going on because last year we only had (members of the class of 2021) on the team,” junior Haley Rosenberg said. “So we were just kinda all bummed last year that we might nor have the girls program after we all graduated but having younger girls come on and keep the team going, it’s a really cool thing to see so that we know our legacy can stay on.”

Fuller was hired at the end of May so he didn’t get the chance to get out to the middle schools and talk about the program that he hopes to do this year.

“Believe me, as the first year coaching at Mingus and coaching the girls team, I hope to get as many girls interested as possible in the sport,” Fuller said. “It is my intention to get out to the feeder schools and get as much interest generated in the program as possible so that instead of having five girls out here we can maybe have 10 girls out here, 12 girls out here and start having them develop appreciation for the game.”

Junior Kaila Bowers said she loves Fuller’s plans and that he wants to grow the program.

“Oh he’s been cool, yeah I like him a lot,” junior Suzie Tanner said. “He’s really nice and he’s helping us a lot with our swings and where we hit the ball and stuff.”

He said he’s excited to be coaching again.

“It’s fantastic, it really is,” Fuller said. “I coached for seven years in Camp Verde and I’ve been off for the last two years and I guess the old expression ‘you don’t know what you’ve got until it’s gone’ applies,” Fuller said. “I feel like it was good to take a break for a couple of years and kinda focus on teaching but I’ve really, really missed it and I am overjoyed to be coaching again; absolutely just excited and ready to go.”

Golf at Camp Verde is a spring sport and is coed.

“Coaching and the kids playing in the extreme heat at this time of year is much, much different than I am used to in Camp Verde where we started in February and it was very cool out and even by the time we finished in early May it still didn’t get like over 100 degrees like we’ve had for 10 days in a row now,” Fuller said on Wednesday. “So it’s definitely an adjustment to make for me. I think the kids are more used to it certainly than I am since they’ve been playing for several yeas in this kind of heat.”

“Kaila Bowers played in a couple tournaments this summer, junior golf association tournaments and by the end of the season I think she’ll be probably shooting be shooting in the 40s, if not lower,” Fuller said. “She loves the game — not that the other girls don’t love the game, they do as well — but I think that Kaila’s really excited and she’s gonna go out there and give it everything she has.”

She said she played over 100 holes of golf this summer and though it was tough in the heat that it was worth it all.

“Personally I think I have done really good, I have been working all summer,” Bowers said. “I’ve gone to practices the entire summer, I’ve been getting lessons, so I’ve definitely excelled from my sophomore year and I’m really excited to see how my junior year turns out. It should be better hopefully (laughs).”

The Marauders will compete in the 10-team Division II Section V as well as at a couple tournaments in the Phoenix area.