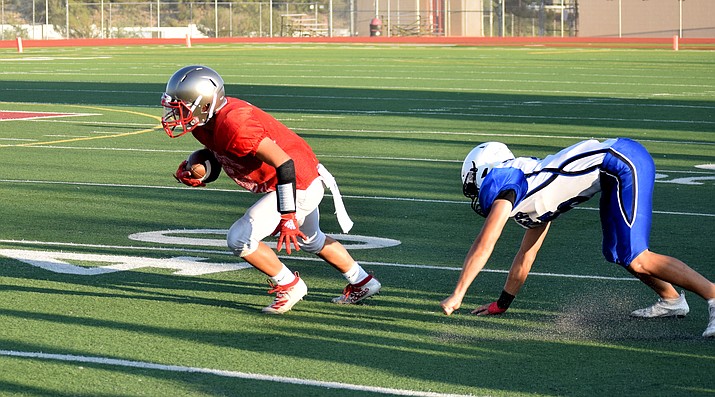 Mingus Union opens the season on Friday at San Tan Valley Combs at 7 p.m. Their home opener is Sept. 13 against Chandler Seton Catholic.

“They’re looking good, Ortiz said. “We’ve had our growth through the spring and summer, we’ve gone through everything that we feel our offensive and defensive install and we’re looking good. Football’s a roller coaster ride so we’re going to have our ups and downs, we know that, growing pains comes and goes but other than that the kids are figuring it out and they’re on the right track.”

Last season the Marauders had 10 all-region selections, plus Grand Canyon Region offensive player of the year Antoine Zabala but they were all seniors last year. However Ortiz was region coach of the year.

“Replacing kids that understand and know the game of football is always a tough one but that’s our job as coaches, to coach what it is that we have within our program and get them coached up and game ready,” Ortiz said.

After starting last summer, the second year head coach has been recruiting at Mingus Union though he said that comes naturally. He was a college coach for years and recruited there.

“We have a ton of athletes walking around on campus so it’s just about getting in their head and letting them know that it’s not as hard as they think it is, whether they’ve played in the past or not, we’re just trying to get them out for football,” Ortiz said. “Come and see if they enjoy if for themselves and then make that decision. We’ve had some success doing that.”

Ortiz was a track and field assistant coach for MUHS last year and teaches. He has also had help from Mingus Union PE teacher and head cross country coach Dave Moncibaez, who teaches freshman boys and encourages them to go out for football.

Ortiz also wants the football players going out for other sports. He said there’s skills in all of them that translate to football.

Junior receiver/defensive back Jonny Sanchez has been shredding defenses after catches during the preseason after running track.

“If they don’t play for (head baseball) coach (Erick) Quesada, who helps coach within our football program, I try to push them to run track, especially at the sophomore and junior years, because that’s a huge developmental year in terms of their bodies changing through puberty,” Ortiz said. “One of the kids that’s going to be a really huge help to us this year decided to run track his sophomore year and his speed and agility has gone through the roof this year and he’s really just developed into a great football player. So I’m hoping to use him as the example moving on into the future.”

On offense sophomore quarterback Zachary Harrison takes over for Zabala, who rewrote the Mingus Union passing record book. However Harrison was selected to play in the U-14 International Bowl VIII game at AT&T Stadium when hew as in seventh grade.

“Zach’s been a guy that we thought very highly of,” Ortiz said. “We knew he could get it done mentally, now it’s just about being able to continuously go through progressions and not feel the pressure. We have a ton of senior linemen so hopefully they can alleviate that pressure from him and allow him to do what he does but he’s gonna be a good one. We just got to keep him healthy like the rest of our team.”

Ortiz said he is impressed with the Marauders’ offense.

“They progressed all summer long,” Ortiz said. “We’ve gotten through our install. The kids know their reads and they know their routes and now it’s just about executing. It’s just about being perfect and not having mental errors and you gotta minimize mistakes and maximize opportunity.”

“The defense is looking lights out,” Ortiz said. “Coach Robertson’s got our guys flying, they’re moving, they’re playing with authority, they’re very disciplined with their eyes, though their motions and now it’s just gonna be about them staying healthy and being perfect.”

Robertson and Ortiz coached together for three years at MCC and though they led rival position groups (Ortiz coached receivers and Robertson defensive backs) they became friends.

“We used to compete against each other on a weekly basis and we’ve been boys for four years now and when we had teaching jobs available and that job came open, that was huge for us to get a guy of his caliber to come up with the closure of JC football,” Ortiz said. “He’s going to be one of those guys that will be able to throw his hat in the ring for a heard coaching job soon.”