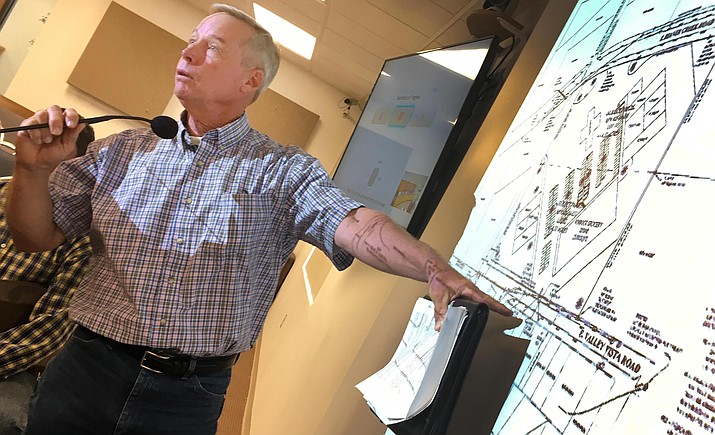 Dugan McDonald of High View LLC explains his request for a zoning map change from R1L-35 residential single-family to C2-1 commercial general sales so he can build a shopping center in Rimrock. The center would be located at the southeast corner of E. Beaver Creek and N. Dave Wingfield roads. VVN/Bill Helm

COTTONWOOD – Dugan McDonald is less than a month away from seeing an 8.17-acre Rimrock parcel rezoned for development as a shopping center.

Thursday, Yavapai County’s Planning and Zoning Commission voted 9-to-0 to recommend the Board of Supervisors approve a zoning map change from R1L-35 residential single-family to C2-1 commercial general sales. 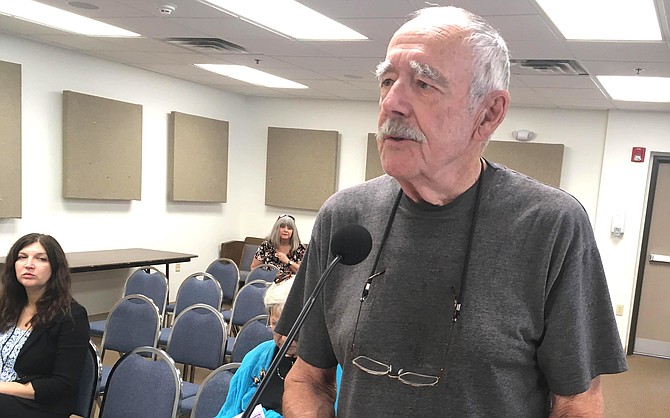 Bob Burke of the Beaver Creek Community Association speaks in favor of a zoning map change that would allow a shopping center to be built on approximately 8.17 acres on the southeast corner of E. Beaver Creek Road and N. Dave Wingfield Road in Rimrock. VVN/Bill Helm

McDonald, of High View LLC, plans to build a shopping center at the southeast corner of E. Beaver Creek and North Dave Wingfield roads. The center, according to the commission’s agenda, would include a grocery store, gasoline island and various shops.

Though the project is still in the development stage, McDonald said Thursday that Clark’s Market – also in the Village of Oak Creek – would likely be the center’s anchor tenant.

“Clark’s is the grocery store particularly motivated to come into this site,” McDonald told the commission.

With three buildings totaling about 55,000 square feet, Clark’s would be in the 25,000 square-foot main building, according to the county’s presentation Thursday.

The remaining 30,000 square feet would tentatively house eight tenants, with four 2,500-square-foot spaces and four 5,000-square-foot spaces. But the spaces could either be combined or split, according to Jesse Sharp, director of field operations for Heritage Land Survey and Mapping, a project partner.

Although the development team has talked to three or four possible tenants, “there have been no serious discussions,” Sharp said.

In a June 18 letter of intent, McDonald wrote that High View proposes to install standard septic systems “to support the sanitary sewer needs of the plaza.” Water, electric and phone services will be provided by local providers already available to the property.

Of the three Beaver Creek residents who spoke about the proposed project, two were in favor.

“It’s something the community needs,” said Bob Burke, Beaver Creek Community Association treasurer. “It’s been in our community plan for years. We hope you approve this project.”

Although he supported the proposed development, Association Secretary Ron Melcher spoke of stipulations such as dark sky compliance, as well as no onsite self-storage facilities, no wells drilled on the property, and the inclusion of a vegetation screen along Beaver Creek Road.

Rimrock resident Dorcas Gerace brought a nine-page document explaining why she was not in favor of the proposed project.

Gerace told the commission that her home is “three doors down from the edge of the property.” She said the area’s graffiti “does incite more of a contest between the different gangs.”

She asked McDonald “if the development would be responsible for covering up the wall when taggers add their creativity.” McDonald said that the property owners would maintain their property.

“We would call the law,” he said. “That’s how we would handle it, through the proper authorities.”

McDonald explained that there would be a “fenced, screened block wall at the back end of the property” along E. Valley Vista Road.

County Board of Supervisors are scheduled to consider the zoning map change at 9 a.m. Wednesday, Sept. 18 in Cottonwood.

Both meetings will be held at Yavapai County Administrative Services Verde Valley complex, located at 10 S. 6th St. in Cottonwood.