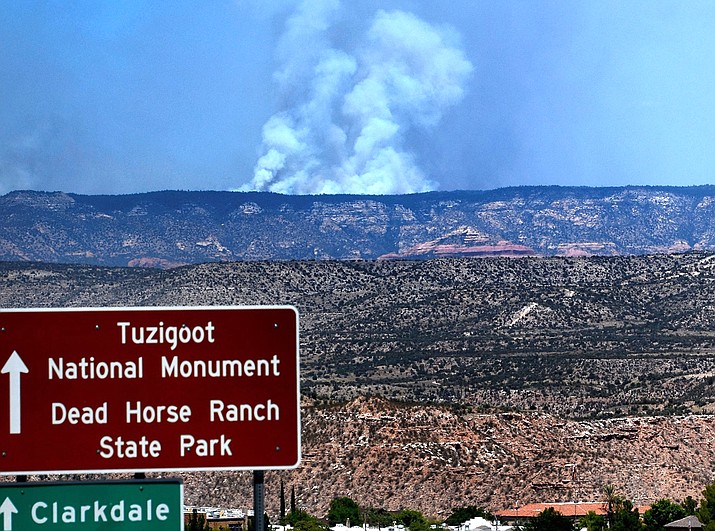 The Coconino National Forest fired up ignitions at the Saber Fire on Wednesday producing a large smoke column northwest of Sedona. The smoke is traveling north-northeast and may not lift as well as expected. Leftover smoke is expected to settle in low lying areas and canyons as the temperature drop, according to the Coconino National Forest and the National Weather Service. VVN/Vyto Starinskas Photo

NORTHERN ARIZONA -- In less than a week, the Saber Fire north of Sedona has grown from 394 acres to 2,194 acres.

As of 5 p.m. Wednesday, the type-3 wildfire located 12 miles southwest of Flagstaff and south of the Turkey Butte Lookout was burning grass, oak and locust shrubs, timber and decomposing fire scarred logs, according to InciWeb, an online incident information system.

Fire managers on the Coconino National Forest have determined that the Saber Fire will benefit the ecosystem as it moves across the landscape naturally consuming dense forest fuels. InciWeb reported.

InciWeb is also reporting that the fire’s weather concerns include hot and windy conditions through the weekend, and a high pressure system with some moisture and higher winds likely later next week.

As the 3,481-acre Sheridan Fire continues its northern movement, firefighters continue to work with masticators along the Camp Wood Road to reduce vegetation, in anticipation of firing operations, creating a buffer to reduce the fire intensity of the advancing fire.

According to a press release from the Prescott National Forest, the Sheridan Fire, located 23 miles northwest of Prescott on the Chino Valley District, continues to be allowed to fulfill its natural role while firefighters continue to provide point protection of cultural and natural resources.

“Utilizing the lightning-caused fire for resource benefit will improve wildlife habitat and restore more open forest understory with grasses and forbs,” according to the Prescott National Forest press release.

Both the Sheridan and Saber fires were caused by lightning.

With smoke impacts continuing to be expected, the Prescott National Forest recommends that the public plans activities during the earlier part of the day.

“For those more sensitive to smoke, we also recommend staying indoors with windows and doors closed and bringing pets inside,” the press release stated.

For more information on the Saber Fire, visit inciweb.nwcg.gov/incident/6519/.

For more information on the Sheridan Fire, visit inciweb.nwcg.gov/incident/6522/.