Vacation home rentals in Jerome not booming like Sedona … yet 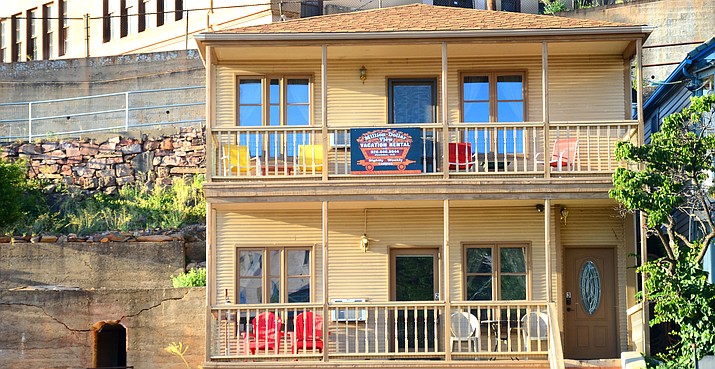 The Million Dollar View Vacation Rental No. 2 is located on Main Street in Jerome. VVN/Vyto Starinskas

Fears over a vacation-home rental boom in Jerome is not living up to the explosion of short-term rentals in Sedona.

Former mayor Lew Currier was on the Town Council when Jerome spent $50,000 in attorneys’ fees to outlaw vacation homes five years ago. Today, he said the fears have not materialized in Jerome … yet. 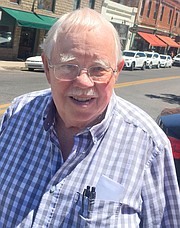 Currier does warn that once developers have maxed out Sedona they may look at Jerome.

“Once they take over Sedona, they will come here,” Currier said.

A survey of vacation-home rentals in Jerome by the Verde Independent show 31 vacation home listings on the two popular websites, Air B&B and vacationrentals.com for Jerome.

Almost half of these vacation homes are in commercially zoned areas where they would qualify to operate as a bed and breakfast or a rooming house.

A survey by the Town of Jerome shows about 20 vacation home rentals and is close to the Verde Independent study once you deduct the duplicate Air B&B and vacationrentals.com listings; and the buildings that have several vacation home listings in one structure.

After eliminating duplicates and multiple rentals in the same building, there are about 27 short-term properties that include commercial and residential properties in Jerome, according to the two unofficial surveys.

Currier said he thought 25 vacation home rentals in Jerome sounded about right. He said there were probably about 20 when he was mayor.

The law that changed everything

When SB1350 became law in 2017, municipalities were prohibited from regulating or restricting short-term rentals such as those advertised on airbnb.com. Jerome, Sedona and other Arizona cities and towns had to abandon attempts to regulate vacation-home rentals through zoning or other restrictions.

The fear was that vacation home rentals would replace year-round residents and change neighborhoods forever.

Now, several current and former Jerome officials are listed as owners of such vacation home owners on rental websites.

The City of Sedona hired a monitoring company to determine how many vacation homes are in Sedona, explained City Manager Justin Clifton.

The City of Sedona calculated the number of short-term rental properties within Sedona city limits, as of Aug. 1, 2019, at 1,093. Of those, 40 percent were traditional lodging providers, bed and breakfasts or timeshares, according to data from Host Compliance, Seattle, Wash., stated a Sedona information release.

Megan McRae, management analyst, City of Sedona, said there are 650 non-commercial or residential (houses, apartments, condos, town-homes) properties in Sedona and 400 commercial properties (such as timeshares) listed as vacation homes, she said. The total residential inventory of Sedona is 6,500 units, she said.

McRae said it’s important for the City of Sedona to focus on those residential numbers and the long-term impact on the local real estate market.

The town of Jerome has counted 157 residential structures, according to Jerome Town Manager Candace Gallagher.  “Given that some are multiple family residences, the number of individual residences may be closer to 200, based on our utility billings,” she said.

Knight said this does not lessen the impact of that one vacation-home rental on a quiet Jerome neighborhood where the streets are steep and the yards are tiny.

Louder in our backyard

The issue came to a high point in Sedona during a community meeting in July with state Rep. Bob Thorpe, R-Flagstaff, when residents complained about how the high number vacation home rentals in Sedona were negatively imnpacting their neighborhoods.

The meeting even led to an article in USA Today under the headline: “They killed our city: Locals feel helpless as vacation rentals overrun Sedona, Arizona.”

Currier said the first vacation rental came to Jerome about 10 years ago and it was different than a traditional bed and breakfast because the “owner didn’t live there,” and the Internet was used to rent the property.

“My understanding was that there was big money moving around in Phoenix. That the real estate people wanted this to happen” he said.

“The impact is worse here on the neighbors because there’s no place to park primarily,” Knight said. Renters may show up with several cars for one small vacation rental.

The other complaint the town receives about vacation rentals is the noise and partying, he said. When people are living in a tighter space like Jerome, two or three vacations homes on a street can seem like an epidemic, he pointed out.

The danger is that the more vacation rentals there are in Jerome, the less permanent residents there are, Currier said.

Jerome needs residents to fill its volunteer fire department, the library, and town boards and commissions. “The less people that live here, the harder it is to get volunteers.”

“It is a danger in a sense that a corporate enterprise outside the city could easily decide ‘hey this is a hot spot and we could make a bundle’ and buy up a bunch of houses and turn them into vacation homes,” Currier said

Counting the number of vacation-homes in Jerome is valuable information because this will give the town an idea if the trend is increasing, Knight said.

“Is this an epidemic, or is this fluctuating and going up and down a little bit? Is it something that’s going to lock in at about 10 or 12 percent,” Knight asked, “or is it something that will increase every year?”