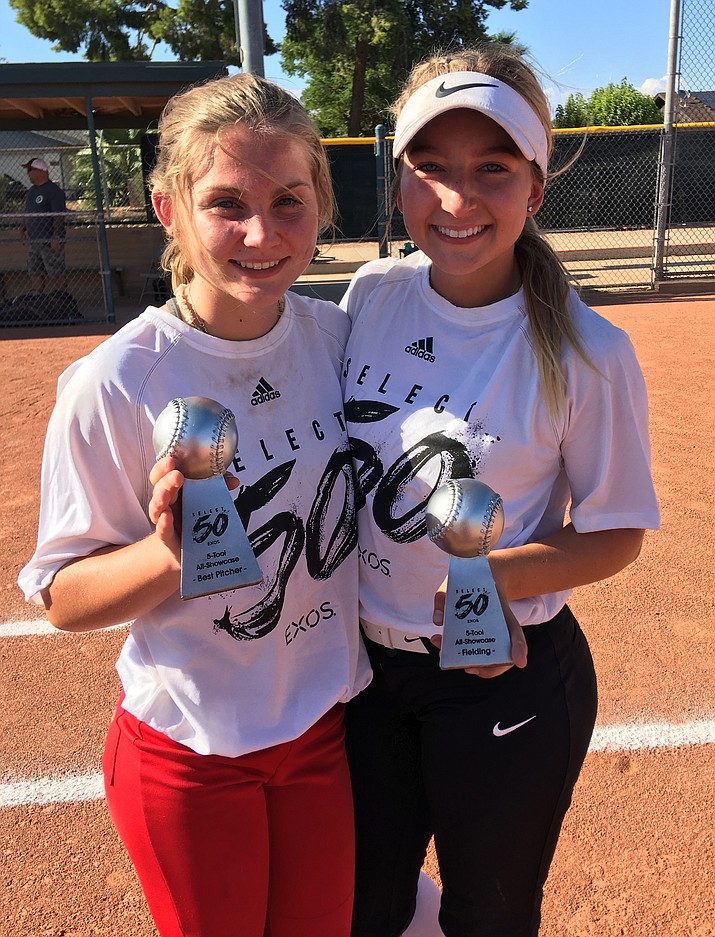 Mingus Union softball players Dylan Sweeney and Alexis Ayersman were surprised when they selected for the EXOS Select 50 instructional Showcase last month but more than showed they belonged.

Sweeney won the 5-Tool Fielding Award and Ayersman won the Best Pitcher Award. They awarded four players for their exploits in the 115 degree heat in Phoenix.

The Verde Valley Newspapers talked to Sweeney, a senior outfielder and Ayersman, a sophomore pitcher/outfielder, about the experience.

Verde Valley Newspapers: What did you think when you heard were selected, because softball is so good in Arizona?

Sweeney: I was actually surprised for the most part because I’ve never really heard of EXOS but when I looked more into it, it looked very elite and the fact that it’s multiple states chosen, like specific girls for the program, is very impressive so I was really excited.

VVN: What kind of preparations did you do before? Did you do extra drills or anything?

Sweeney: Well I joined a Phoenix club and they compete at a higher level than the team I was on here in the Verde Valley and so I stepped up my workouts and programs for the camp.

Sweeney: It was really good. There was coaches from all over different colleges and NPF and it was very hands on and they were with you every step of the way.

VVN: What was it like for you personally, how do you think you did?

Sweeney: Overall I think I did pretty good, there was a lot of talent there, but overall it was a really great experience. I feel like it was a lot of exposure for other colleges to see the girls in the camp.

VVN: What was it like to not only do so well but have one of your high school teammates do so well too?

Sweeney: It was really fun having one of my players there too, we kind of just support each other through the whole thing and we were really excited that we both did well.

VVN: Have they started recruiting you at all or is that later on?

Sweeney: So with the program they’re sending out our placings and how we ranked overall to colleges, so we’ll probably be seeing those results soon.

VVN: And finally, changing gears a bit, how’s the start of volleyball season being going?

Sweeney: Really good, we haven’t started yet, game wise, but our practices are looking really good.

Verde Valley Newspapers: What did you think when you heard were selected, because softball is so good in Arizona?

Ayersman: I was honestly very surprised, I wasn’t expecting it and I feel very honored to have that opportunity to go.

VVN: Before hand, did you do any extra preparations?

Ayersman: I did, I went out weeks in advance and I was doing extra drills, working on my glove work and pitching and making sure my tempo was good.

Ayersman: It was hard at first because I haven’t been out that much in a while but it really helped everything and made it all work together.

VVN: How fun was it to represent Arizona when there’s other states there?

Ayersman: It was amazing, I loved it and being with Dylan really helped and we just made it good together.

VVN: How do you think you did personally?

Ayersman: I think I did pretty good, I learned a lot from the camp and I met new people and the coaches really helped me because it was very personal.

VVN: How much do you think it will help you out come high school season?

Ayersman: It helped me a lot because I learned new steps on what to take to get better and I learned more about myself that can help for school ball season.