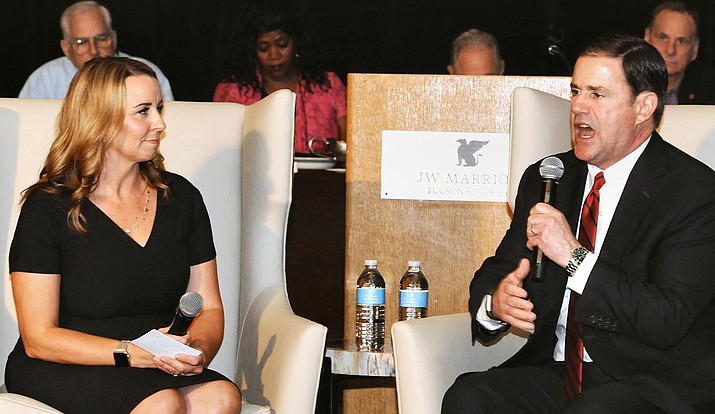 Gov. Doug Ducey chats Thursday with Gilbert Mayor Jenn Daniels at the annual conference of the League of Arizona Cities and Towns in Tucson. The governor later told reporters it is time to revisit a law that restricts the ability of local governments to regulate vacation rentals. Capitol Media Services photo by Howard Fischer

TUCSON — Acknowledging it hasn’t quite worked as promoted, Gov. Doug Ducey wants to take a new look at legislation he signed three years ago that pretty much stripped cities of their ability to regulate vacation rentals.

The governor said he still believes in the rights of individuals to be able to rent out rooms in their homes — and, in fact, their whole homes for special events like the Phoenix open — to help them earn some extra money.

But Ducey conceded that the 2016 law, SB 1350, may be being used in ways that were not intended and have been “disruptive.’’ And that, he said, may include the practice of real estate speculators buying up homes in neighborhoods for the sole purpose of turning them into short-term rentals.

The comments come on the heels of complaints from some communities, particularly tourist donations, where much of what had been the residential rental stock has been turned into short-term rentals, reducing the the supply of affordable housing. In fact Senate President Karen Fann, R-Prescott, said developers are construction homes with eight bedroom suites for the specific purpose of renting them out to tourists.

“So this is now people circumventing all the zoning regulations and everything else that hotels and motels have to go through,’’ said Fann, who met with more than 100 city officials here in Tucson to talk about the issue. “They’ve found a loophole that they are now building, if you will, mini hotels and motels in residential neighborhoods.

In signing the original 2016 law, Ducey proclaimed himself an unabashed supporter of the concept of unregulated vacation rentals.

“For thousands of hardworking citizens, opening up their homes to out-of-state guests provides the financial breathing room they need to provide for their family or enjoy an extra expenses that they otherwise couldn’t afford,’’ the governor said at the time.

SB 1350, however, did more than keep cities from telling people they cannot rent out a bedroom or their home.

There is no limit on the number of properties an investor can buy and days a home could be rented out — and all in the same residential area — potentially turning a neighborhood into a vacation rental zone. But Ducey at the time brushed aside the question of whether that could change the character of neighborhoods.

“I’m not going to answer these hypotheticals,’’ he told Capitol Media Services at a signing ceremony organized by Airbnb, a company that arranges short-term rentals through its internet app.

“The markets adjust,’’ the governor continued. “Somehow we survive people making entrepreneurial decisions, and innovative apps like this provide convenience and cost-sharing opportunities.’’

On Thursday, Ducey acknowledged that perhaps the law he signed didn’t quite work out the way he had envisioned.

“I think there were some unintended consequences in a law that had the best of intentions,’’ he said, something he said is “not unusual’’ in the legislative process.

“It does appear in the situation of Airbnb and other organizations that we have some people out there that are doing some things that are disruptive to communities,’’ Ducey said.

“I do think there are some things we can address in terms of public policy,’’ the governor said. “And we’re going to be doing that in the upcoming legislative session.’’

Fann was more direct. She said Thursday that what lawmakers voted for in 2016 was not what they got, with the measure promoted as helping elderly homeowners keep their homes.

“Why shouldn’t the little old lady be able to rent her house out for 30 days and she goes and visits the grandkids?’’ the Prescott Republican said.

Rep. Noel Campbell, R-Prescott, said his ideal solution would be to pretty much scrap the whole 2016 law.

“I support the neighborhoods,’’ he said. And as far as he’s concerned, the issue of how and when people can rent out their homes should be left to local city councils, unfettered by legislative intervention.

Campbell’s views are not new: He was one of only seven lawmakers to vote against the 2016 measure.

Another was Rep. John Kavanagh, R-Fountain Hills, who also continues to try to restore more local control. But he’s not convinced that outright repeal is politically possible.

“My ideal solution would be to ban them from residential zones,’’ he said.

But Ducey, for his part, appears more interested in minor tinkering.

“It’s really digging in to where the specifics are and how we fix it without wholesale change in terms of what citizens can do if they want to legitimately rent out their home for the Phoenix Open or some other event during spring training,’’ the governor said. What that means, he said is protecting “individual rights.’’

Ducey said that’s why he agreed to sign the legislation this year on the issue of party houses.

And the issue of whole neighborhoods being converted?

“That’s something I want to dig into deeper and find out where the problem lies,’’ he said.

One hurdle to major alternations could prove political.

During the debate on Kavanagh’s legislation earlier this year, Rep. Jay Lawrence, R-Scottsdale, said he also is a foe of what he said are abuses of vacation rentals, particularly for party houses. But he said there’s another factor at work in making changes.

“Let me point out that real estate agents are a very powerful entity within this body,’’ Lawrence said.

Ducey did sign a measure earlier this year to curb what was seen as one of the more blatant abuses, with single-family homes being turned into weekend “party houses.’’

That new law, which takes effect this coming week (eds: Aug. 27), spells out that homes can not be used for parties, restaurants, sales or other non-residential purposes. And it requires owners to provide a point of contact for police to call if there are problems.

But that is a far cry from the original proposal by Kavanagh who contends the problems are far deeper -- and worse.

He sought to restrict the number of occupants to not more than two adults per bedroom and to limit visiting hours for guests. And Kavanagh even wanted to require that owners actually install cameras and noise sensors to detect what is going on.