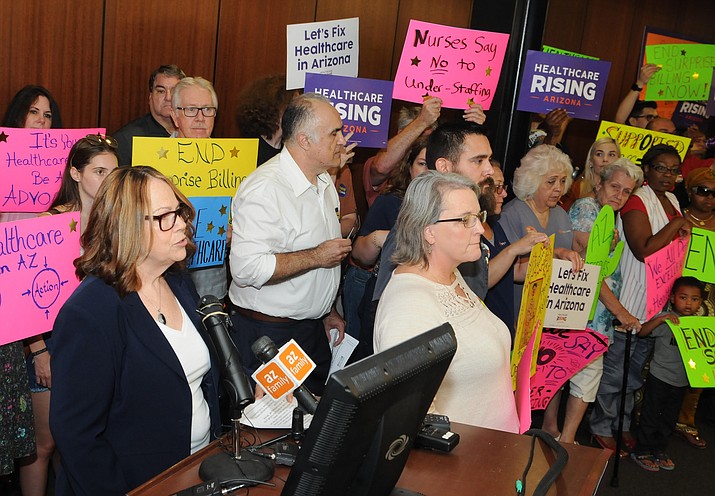 PHOENIX — The state's hospital industry is gearing up to fight a ballot measure that would require its members give virtually all their employees a 20 percent pay hike over four years.

Greg Ensell, spokesman for the Arizona Hospital and Healthcare Association said wages already are higher than the statewide average, at least when considering everyone employed by hospitals from top executives on down. And he said there is no hard evidence to back claims by supporters of the initiative being financed by a California-based union that the current wage structure is leading to staff shortages or high turnover.

The association also is opposed to another provision of the measure that seeks to impose new oversight about the incidence of hospital-acquired infections.

In a prepared statement, Ann-Marie Alameddin, the group's president and chief executive officer, said the performance of Arizona hospitals already exceeds the national benchmark in the initiative.

Ensell said his association had no comment on two other provisions of the initiative that do not directly affect its members: ensuring that people with preexisting conditions can get insurance coverage and limits on the ability of insurers to refuse to cover medical conditions because the treatment was provided by an out-of-network physician.

On that latter plan, Marc Osborne who lobbies for Blue Cross and Blue Shield of Arizona said insurers are studying the language but have no immediate reaction. Insurers and doctors did agree to a less comprehensive 2017 law designed to provide a method for patients to appeal

The last two provisions in particular appear to be issues likely to be popular with voters.

There is national attention to the issue of preexisting conditions, particularly with Congress debating whether to scrap the Affordable Care Act and its prohibition against denying coverage to those who already are ill and lawsuits, including by Arizona Attorney General Mark Brnovich seeking to have the law declared invalid. That, in turn, could help build support for what is crafted as a take-it-or-leave-it package.

But campaign spokesman Rodd McLeod said these are not designed to be carrots to get voters to approve the entire plan, saying the four issues are all related.

"It's designed to deal with the problems of our healthcare system,'' he said. McLeod said it all relates to the kind of care people get in a hospital, how effective the hospital is working, and the ability of patients to pay for that care.

Backers have until July 2 to get the required 237,645 valid signatures on petitions to put the package on the 2020 ballot.

Jenny David, a labor and delivery nurse at St. Joseph's Hospital in Phoenix, claimed that Arizona has among the highest turnover in hospital staff in the country, "with nearly one in five leaving for jobs in other states, or leaving the profession altogether.''

"Because salaries are so low, hospital worker shortages have real consequences for patients, such as emergency room overcrowding, reduced hospital beds and longer wait times for surgeries,'' she said. And the issue, said David, goes beyond the direct medical staff.

"Sometimes we see patients sit in triage for hours because we don't have a clean room to put them in,'' she said.

David acknowledged that the measure, if approved, would mandate 20 percent pay hikes over four years -- but only for those working in hospitals.

The salaries of people with similar jobs elsewhere in the private sector, ranging from medical staff at a doctor's office to custodians in commercial buildings, would be unaffected. But David said that's no reason to vote against the measure.

"I don't think it should only apply to us,'' she said. "All workers in Arizona should have fair pay.''

But the initiative, David conceded, does not do that.

"We're focused on healthcare,'' she said.

Ballot organizers did not immediately produce any data backing the claim that staff turnover at Arizona hospitals is higher than the national average.

Ensell also had no state-specific turnover data. But he did have his own figures, at least on salary, saying that in 2018 the average wage of a full-time employee at an Arizona hospital was more than $75,000, versus an average Arizona wage of $49,290. That hospital figure, however, also covers doctors and medical professionals who are staffers, as well as hospital executives.

Others at a Monday press conference to kick off the initiative drive had their own stories to tell.

Delores Stoeser said her husband died from what she said was methicillin-resistant staphylococcus aureus -- MRSA -- that he contracted at a hospital.

Fernando Vicino spoke of having to have a valve in his aorta replaced.

"The Affordable Care Act could be repealed or overturned and I would not be able to find insurance at all,'' he said.

And Steve Wasson complained about being stuck with high hospital bills for his wife after he said there were multiple tests performed on her without anyone checking with him, explaining their necessity -- or, more to the point, telling him ahead of time what it would cost. But the provision on out-of-network billing would not have helped Wasson because he had no insurance at all.