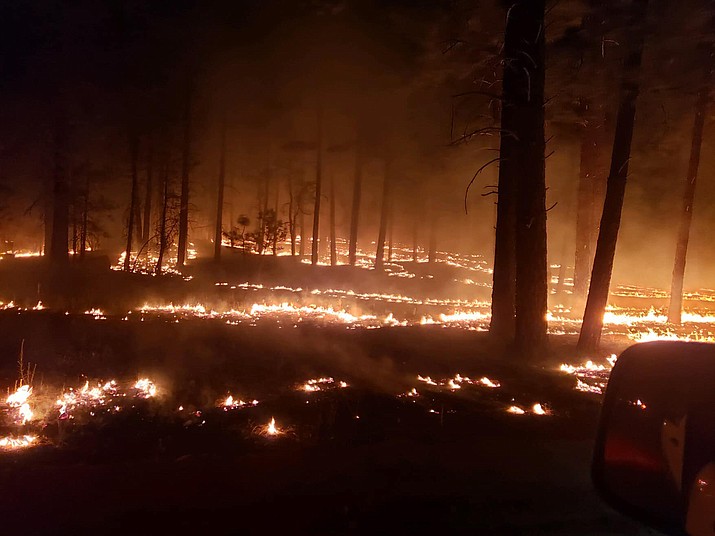 This photo shows firefighters taking advantage of cooler nighttime conditions to introduce fire into the ponderosa pines in the anticipated path of the Sheridan Fire. By doing this, it helps to reduce the potential for extreme heat and high intensity fire of the advancing fire front during the heat of the day. The Sheridan Fire is burning 23 miles northwest of Prescott and has charred an estimated 11,154 acres. Courtesy PNF Facebook Page

PRESCOTT NATIONAL FOREST – A closure order remains in effect over the Sheridan Fire area for firefighter and public safety, the Prescott National Forest reported Monday in a press release.

The Sheridan Fire continues to burn through the brush and grass in a remote area north of Prescott, Prescott National Forest reported.

“The fire has not expanded greatly over the past few days as slightly lower temperatures and increased humidity have moderated the fire’s behavior,” the press release stated. “Crews are continuing to reinforce containment features by burning the vegetation along roadways and other features identified as potential containment lines.”

Visitors and residents near the closure area should be alert for fire vehicles and equipment.

On Sunday, smoke from the Sheridan was mostly light, the press release stated. Smoke may continue to be visible from the Prescott area during the afternoons and into the evening hours, but should not be particularly heavy.

Prescott National Forest reported that a smoke monitor “has been installed in Paulden and it is showing air quality to have remained in the good range throughout the day yesterday.”

Prescott National Forest also reported that the Sheridan Fire is consuming much of the dead and decadent vegetation in the area.

“Like many lands in the U.S., particularly in the west, the area is greatly overgrown and unhealthy following decades of fire suppression,” the release stated. “The Sheridan Fire area is historically fire adapted and requires periodic fire in order to remain vigorous, have a lesser risk of high severity fire, and to provide good quality habitat and forage for wildlife and livestock.”