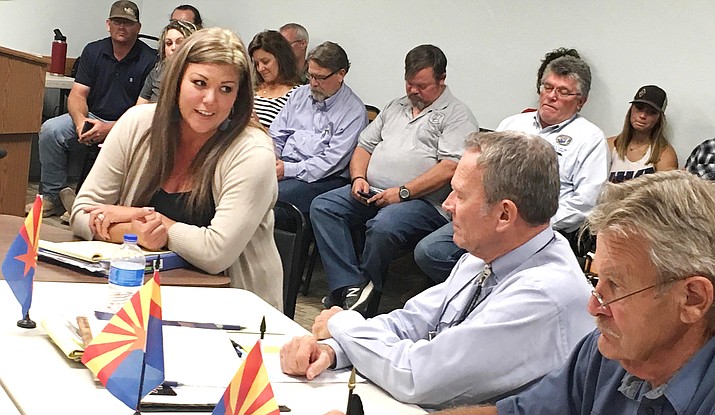 Mary Phelps, Camp Verde Arena Association president, talks to the Camp Verde Town Council at Wednesday’s work session. Council directed town staff to allocate as much as $250,000 of Capital Improvements budget to the association toward building the equestrian center on SR 260 east of Verde Ranger Station near the Camp Verde Sports Complex.

CAMP VERDE — The Camp Verde Town Council decided Wednesday that as much as $250,000 should go toward the Camp Verde Arena Association’s efforts to build an equestrian center.

The money would come from the town’s capital improvements budget and would allow the arena to be ready for a January 2020 event, said Arena Association President Mary Phelps.

“Those events will generate some amount of economic benefit to our town,” Council Member Joe Butner said of the arena, which would be located northeast of the town’s sports complex. 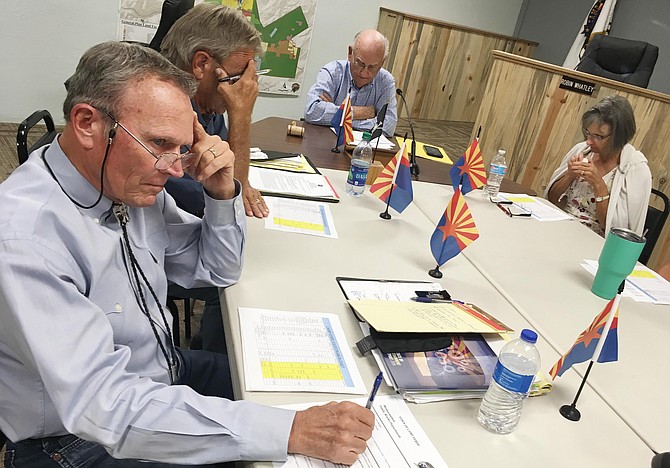 Events at the Camp Verde Equestrian Center “will generate some amount of economic benefit to our town.” Joe Butner, Camp Verde Councilor

“That first event is a junior rodeo, and that’s what we’ve been hoping for.”

According to a spreadsheet, the Arena Association provided council, the $250,000 would go toward engineering, clearing and grubbing, grading, electric, arena installation and a vendor/restroom building.

According to the spreadsheet, the Arena Association is projecting an additional $260,000 in costs toward bleachers, arena installation, fencing, announcer stand, a second arena, ticket building, speaker system and arena tractor.

At this time, the Arena Association has roughly 50 members and about $30,000 in its bank account from fundraisers and donations, Phelps told council.

How to build a sports complex

Council spent the first 30 minutes of Wednesday’s meeting considering what Phase 1B of the sports complex should include.

According to an Aug. 28 memorandum to Martin from Public Works Director Ron Long, the recommended base bid would be to build two football/soccer fields and one baseball/soccer field, as well as field lighting. Long estimated the cost of this work at $3.12 million.

Council discussed ways to save money, although they spoke against the possibility of using portable bathrooms.

“As a mother and a grandmother, I just don’t like porta-potties,” Council Member Dee Jenkins said. “With little kids, to me we’ve got to have a real bathroom.”

With $3.1 million remaining to build Phase 1B, Public Works Director Ron Long suggested council consider which items must be built in the current budget year, and which could be built at the beginning of the next budget cycle, 2020-2021.

“Since grass has to establish itself [once it’s been planted], we could be building [certain] facilities while we’re waiting for the grass to establish,” Long said.

Martin estimated that the fields would not be ready for use until fall 2020. He also said that Phase 1B would likely go to bid in September or October, with council likely to award low bid “hopefully by November or December.”