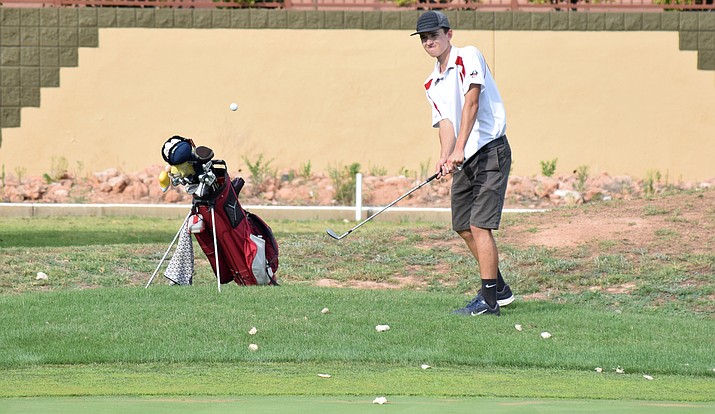 Mingus senior Noah Daher chips the ball into the hole on the ninth at Agave Highlands during the Marauders’ match on Tuesday. He got an eagle. VVN/James Kelley

Led by their top three, Mingus Union boys golf open their regular season account with a win at home.

He said they talked about how they’re going to hit some bad shots and the key is how they respond.

“I thought for a first match we did very well because a lot of our new guys are not used to the competition, you know competitively playing golf but I thought they showed good sportsmanship and they played well and I think we’re just gonna improve from there,” Daher said. “Just a couple simple mistakes that we gotta work on.”

Daher represented Mai’s coaching point well in the wind and heat on Tuesday.

“Personally I just made one error on hole two, I triple bogeyed but I bounced back, I made an eagle and birdie and then I ended up shooting even par, which for me I think I did pretty well for my first match,” Daher said.

Junior Carter Welly tied for second and junior Treyson Peters was fourth in the opening match.

“We got a really solid, experienced top three, with Noah, Treyson and Carter, so they’re doing exactly what we asked them to and then we’ve got some young guys with some inexperience getting some opportunity to play and they’re a nice job,” Mai said. “Really what I’ve seen is they’ve improved over our first three weeks of the season and that’s what we’re looking for.”

The Marauders, who play in Division II Section VII, face a tough slate in their section (called the region in most sports), especially after last year’s No. 1 Justin Tanner graduated.

“The section’s gonna be really tough this year,” Mai said. “Last year there was really only three seniors across our whole region that graduated Justin Tanner, our No. 1, he graduated and there was a couple others but for the most part everybody’s back. Mohave Accelerated’s gonna be fantastic, they had the top two returners and I think their No. 3 was also in the top 10, so they’re gonna be really tough. I know Flagstaff’s a lot better than they were last year, as well as Prescott, so it’s gonna be a really competitive region. So for us to be right there with them we’re gonna need that four and five player to step up and get to bogey golf for us.”

Zeke Nester and Austin Kunze finished in 14th and 15th place respectively for the Marauders on Tuesday.

“I think that we have a good chance at winning the region and hopefully having the chance to make it to State as long as we just keep improving from here on,” Peters said.

The Marauders also go to the Aguila Boys Golf Open at the Aguila Golf Course in Phoenix and the Ridge Invite at the Continental Country Club in Flagstaff.

“I’m really excited and I am waiting for those awesome tournaments at those great courses,” Welly said.