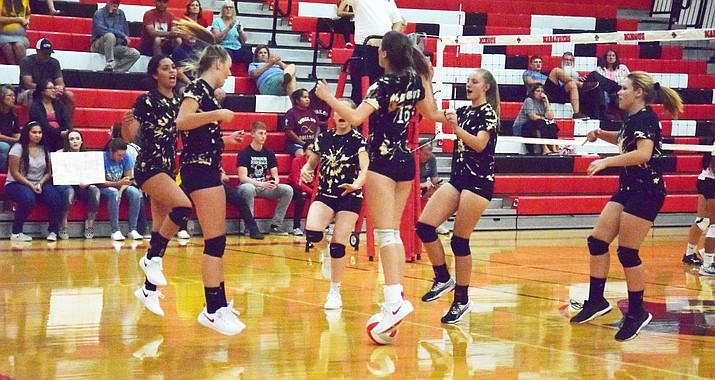 The Mingus Marauders celebrate scoring a point during their scrimmage at home against Winslow on Wednesday night. VVN/James Kelley

A slew of juniors and four seniors will lead Mingus Union volleyball.

The Marauders hosted Winslow on Wednesday night in a scrimmage in front of an impressive crowd.

“It went really great actually,” Mingus head coach Chelsea Chavez said. “The girls were really solid on their serve/receive, which is good because it’s what we’ve been working on, and we were able to utilize our offense a lot more and it was fun to watch.”

Chavez said the Marauders are looking really good this year and that she’s excited.

Last season from the Grand Canyon Region Flagstaff, Prescott and Bradshaw Mountain made it to the state tournament, with Flagstaff reaching the semifinals.

Junior outside hitter/opposite Shelby Link has impressed Chavez in the preseason practices.

“Shelby Link is stepping up, we switched her from middle to the right side and she just is a powerhouse for hitting and she’s gonna do good,” Chavez said.

The varsity veterans have also impressed her.

“My varsity girls who are returning are stepping up in ways that we needed them to step up,” Chavez said.