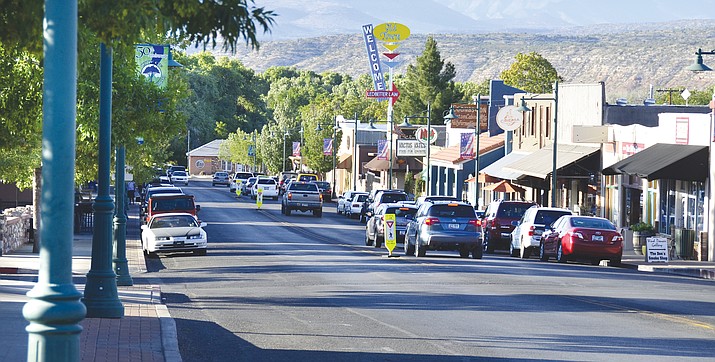 After some years of inconsistency that included its treasurer disappearing with $100,000, the current board for Cottonwood's Old Town Association has held together for more than a year, with another year to go until the next election. VVN file photo

"We are on solid ground. The chamber has been instrumental in helping the OTA get back on track with support, oversight and presence on our board as a fiduciary agent,”

Coming off a positive annual meeting, Cottonwood’s Old Town Association’s Board of Directors is confident it finally has more of the pieces it needs to be a reliable, innovative force for growth and success in marketing the downtown district.

At its Aug. 19 annual meeting, according to Board President Brenda Clouston, the OTA discussed several events it’s held within the past year, along with some upcoming events, as well as the overall state of the organization.

After some years of inconsistency that included its treasurer disappearing with $100,000, the current board has held together for more than a year, with another year to go until the next election.

“We discussed our current status as solid and energized,” Clouston said. “We had a great annual meeting at Red Rooster Café. Our membership has quadrupled.”

Clouston is joined on the board by vice presidents Gavin Gallifant and Mitch Levy, treasurer Jim Ariola and secretary Debbie Garrison. Cottonwood Chamber of Commerce Director Christian Oliva Del Rio meets and engages with the board as a non-voting member.

Clouston said it was a positive move to get even more help from Oliva del Rio and the chamber than it had been receiving. She said Oliva del Rio has been helpful to the OTA for years, even before he took over as Chamber director, but an official partnership between the two organizations made things even better.

“We are on solid ground. The chamber has been instrumental in helping the OTA get back on track with support, oversight and presence on our board as a fiduciary agent,” she said.

Levy, a past president of the board, said he’s more than pleased the OTA gets to utilize the many talents, skills and connections of Oliva del Rio.

“Christian’s been a great addition,” Levy said. “He has skills in so many areas, and tons of great ideas. He understands the advertising world; he understands the tourism world, and he’s a great overseer, always seeing the big picture. I’m glad he’s on board.”

Clouston said the Aug. 19 meeting touched on the association’s upcoming events in the busy autumn and winter months, such as the “Bootlegger’s Bash,” to be held in the Old Town Activity Park on Saturday, Sept. 21, at the same time as the Thunder Valley Motorcycle Rally.

Past events that will continue to be held annually include Safe Night trick-or-treating in Old Town on Halloween, the Chocolate Walk and VIP Chocolate Walk on the first weekend in December, Sip & Stroll in February, a cornhole tournament in June, and others. The OTA also has a presence in supporting City of Cottonwood events.

Levy said the cornhole tournament, held at the start of this summer, is an example of a great idea that was well-executed through much hard volunteer work, far exceeding goals in terms of amount of participants.

Levy went on to not only praise his fellow board members for the many hours they put into promoting and organizing events, but also to point out the structure of the board is another reason the OTA has become more effective.

“We went from nine board members to five voting members,” Levy said. “That helped a lot. Now, everyone knows their roles.”

Clouston also had high praise for the board she serves on.

“On a personal note, I am very proud of this board,” Clouston said. “The five of us work long hours, not only to produce the events and decide on marketing, but to make sure we are viable and legal. We are careful to be aware of our by-laws and be good stewards of our funds.”

Levy said the board members take care not to take board decisions personally. Clouston echoed that sentiment.

“We run the board like a business,” Clouston said. “Although we enjoy one another, and have become friends, we put our heads down and work hard at meetings, taking a fair amount of work home.”

Clouston said growth of membership is still a priority.

“Membership helps us fund crucial marketing efforts for Old Town and produce the events guests and locals love,” she said. “But not everyone has joined yet, so we are still looking for members.”

All five board seats are two-year terms that end in the fall of 2020.

In discussion of possible new events, Clouston said the board is contemplating a New Year’s Eve barrel-drop event in Old Town, and is looking for volunteers to help organize such the evening activity.

One of the OTA’s stated goals is to “promote tourism of Cottonwood Old Town as a destination.” Clouston said businesses and everyone in the Cottonwood area can help the growth of the community.

“We hope the merchants and hospitality partners in Old Town and our friends beyond its borders recognize the strides that have been made,” Clouston said. “We hope they join our efforts to keep our Old Town shining brightly as a friendly Verde Valley destination.”