CORDES JUNCTION — Thursday, just before 11 a.m., a traffic stop along northbound I-17 led to one of the larger unexpected seizures of methamphetamine in Yavapai County in recent memory, according to a news release.

A YCSO K9 deputy stopped a silver Chevrolet passenger car headed northbound I-17 in the Cordes Junction area for equipment and moving violations. 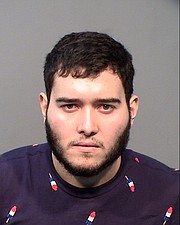 Siebel Giovanni Carrillo Olivas, 18, was one of two men traveling from Mexico, northbound on I-17, Thursday when police stopped the vehicle he was in, allegedly discovering 15 pounds of methamphetamine.

The driver was identified as 18-year-old Siebel Giovanni Carrillo Olivas from Mexico, who was traveling with a passenger, 20-year-old Axel Agustin Olivas Carrillo.

Due to a language barrier, a Spanish-speaking deputy came to the scene and assisted with communication. The deputy noted that both occupants were extremely nervous, the release states, well beyond the behavior of average motorists in the same situation.

During a discussion about the reason for the traffic stop, deputies noted both individuals were deceptive when answering basic questions about their travel plans. When asked, Olivas, the driver, granted consent to allow deputies to search the vehicle while denying any drugs or guns would be found. 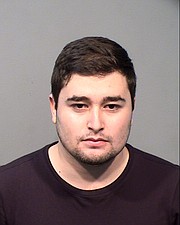 Axel Agustin Olivas Carrillo, 20, was one of two men traveling from Mexico, northbound on I-17, Thursday when police stopped the vehicle he was in, allegedly discovering 15 pounds of methamphetamine.

After obtaining consent to search the vehicle, deputies located a large cardboard box labeled ‘potatoes’ in the trunk. Inside the box, was a black trash bag that contained 15 one-pound packages of methamphetamine.

The two men remained in custody Friday morning. Bond has not been set as of this writing.