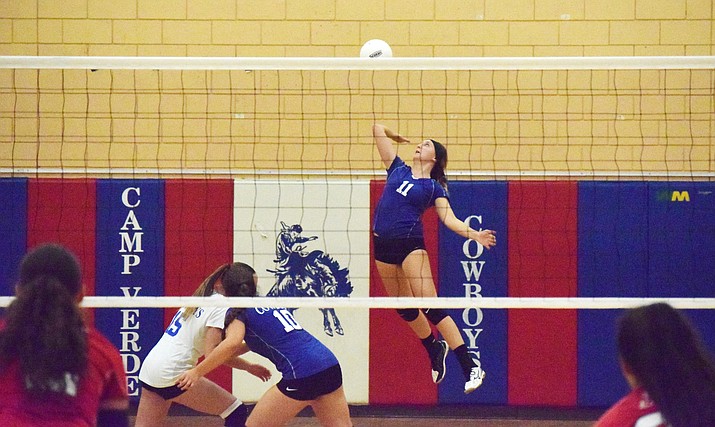 Not only has Camp Verde High volleyball expanded, the Cowboys enter the regular season with a new outlook.

While the Cowboys feature on other CV teams like basketball and softball after the high school volleyball season, they face foes that play volleyball year round. But this year the Cowboys are looking at it in a different way.

“We’re like ‘you know what? We do only play in the season and we do play girls who play year round but you know what? We’re gonna show them what we got,” CV head coach Britney Armstrong said. “We’re not going to use that as an excuse anymore, we’re gonna just go out there and we’re gonna show these teams ‘hey, we do play only season ball but we’re not gonna back down. We’re improving and working hard in the short amount of time that we have together and they have grown leaps and bounds.”

The Cowboys scrimmaged Ash Fork and Mayer on Thursday night.

“We look strong, we have a lot of potential and we’re just working on consistency,” said Armstrong, the 2018 Central Region Coach of the Year. “So that was one thing we all just said (Thursday) night, we have our goals and after playing we talk about ‘yes/no, did we do this? Did we not? And so (Thursday) night that was one weakness for us, our consistency and we’re just gonna find that with working harder in practice and just knowing what our roles are. We’ve got 11 girls on the team and every single one plays a big part.”

This year 46 girls tried out for volleyball, so many that they added a third team to the varsity and JV, a JV ‘B’ team.

Armstrong said she was really impressed by Hedges in the scrimmages.

Junior Lily Smejkal, who moved up from the JV, has impressed as well.

“She’s worked hard all offseason and summer, she works so hard and is catching on so quickly and what’s great about her is she just has the best attitude,” Armstrong said. “She’s probably one of the most coachable kids I’ve ever had.”

Last season the Central Region had four teams make the postseason, three into the state tournament proper and Glendale Prep finished second in the state.

“Our region is always tough (laughs),” Armstrong said. “We have a tough region, which we like, we like to play up and competitively.”