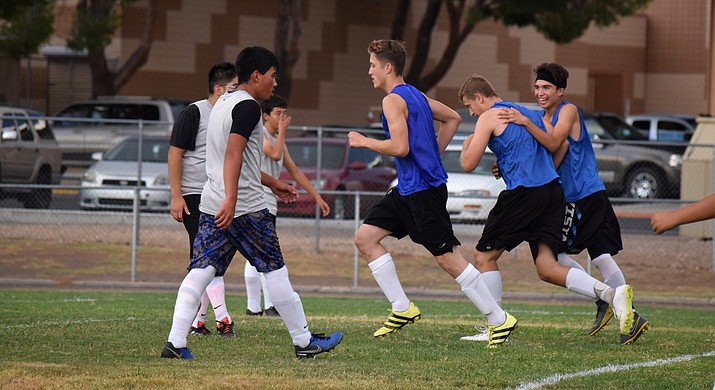 The Camp Verde Cowboys celebrate a goal during their scrimmage against Ash Fork on Thursday night at home. VVN/James Kelley

Camp Verde High boys soccer may have lost a couple more stars but they expect to make another run at the state title.

The Cowboys lost All-2A Brandon Cruz and Joseph Jones from last year’s side that fell in the state quarterfinals to Show Low. Cruz was also 2A Central Defender of the Year.

“We don’t have those one or two super stars like we’ve had in the past,” CV head coach David Miller said. “What we have is about 15 to 20 solid players and then we’ll develop the superstars as the season goes along.”

The program is deep though, 36 players made the varsity and JV teams and they split them into three teams for intra squad scrimmages a couple times a week.

Miller, who coach at Camp Verde Middle School too, said the Cowboys had a great freshman class come in.

“We had 36 boys make the team this year, one of our biggest teams and so we’re fully rostered,” Miller said. “We have 18 JV and 18 varisty players and then we have some kids that will float between the two.”

The Cowboys lost their starting goalkeeper from a year ago but they have three this year.

“They look good, they need some experience,” Miller said.

Although Cruz and Jones were talented, they didn’t lose as many stars as they have the last couple of years.

“It’ll be a little bit easier this time because we only had two (laughs) but I think it’s the leadership that we’ll miss the most,” Miller said. “Those guys had been team captains since their junior year and they loved the game, so they were sorta like leaders on and off the field. We’re in the process of developing that and that culture but we have a great chemistry on the team this year, everybody loves being around each other, just hanging out and that’s I think one of the best things about building a team.”

Camp Verde’s schedule is heavy on bigger schools but Miller is confident.

“Chino’s always going to be solid, Page is a 4A school Blue Ridge and Show and Snowflake, those guys have twice as many kids as we have,” Miller said. “They’ll all have solid programs, we wouldn’t want anything else. Last time I looked they can only put 11 kids on the field and quite frankly I’ll put my 36 up against their 36 because like I said, my guys are just dedicated to being better.”

One change to the schedule this year is that the Cowboys won’t be going to the tournaments that interrupt the regular season. The tournaments don’t count and are usually multiple games in one day.

“We didn’t do any tournaments this year, we’re going to approach the season a little bit differently,” Miller said. “We’re playing 12 games only and so everything will count, there’s no practices.”