Enrollment figures up in Verde Valley schools – so far 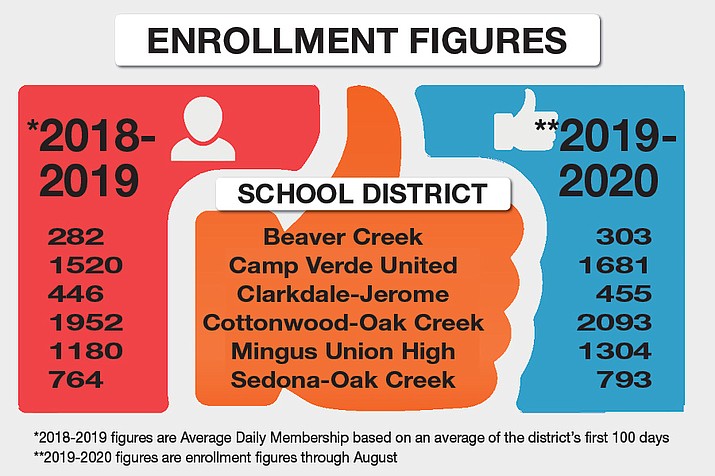 VERDE VALLEY – Of the Verde Valley’s six school districts, only two – Cottonwood Oak Creek and Sedona-Oak Creek – have fewer students than a year ago.

Cottonwood-Oak Creek actually has more students than it projected for the new year.

“We were estimating that we’d be down by 30,” Superintendent Steve King said. “You plan for the worst and hope for the best. You need to be fiscally responsible.”

Districts are funded based on average daily membership, which is defined as the total number of school days within a given term that a student’s name is on the current roll of a class, whether or not the student is present.

ADM is based on an average of the first 100 days of school. But districts also keep a student count – daily enrollment figures.

Cottonwood-Oak Creek’s estimated ADM at this time is 1,932, down 20 students from a year ago. The district’s student count as of Friday is 2,093.

If it sounds confusing, be thankful you’re not the business manager of your local school district.

“Last year when we started having meetings to discuss this year’s budget, raises, etc., we are guessing at how much money we will have,” said Steve Hicks, business manager with the Camp Verde Unified School District. “If we guess wrong and enrollment is down ... tight times.”

Fortunately for Camp Verde, Camp Verde’s enrollment is almost 100 students ahead of a year ago.

“It is probably a number of factors causing the increase,” Hicks said. “But I would say [having] awesome teachers and staff is probably one of them.”

“This is a very fluid figure that ebbs and flows throughout the year,” said Dearden, whose district had 803 students a year ago, but 793 as of the end of August. “It is very difficult to budget based on a projected enrollment/ADM.”

Although the overall student count is down by 10 this year, Sedona Red Rock Jr./Sr. High School is ahead this year by 24. But West Sedona Elementary is down this year from 352 to 309.

At Camp Verde Unified, Hicks said that enrollment “counts every student in our Student Information System, [meaning] every kid coming to school. But ADM only counts pre-school students and kindergarten [as] .5 ADM.”

“Funding is based on enrollment not attendance,” said Danny Brown, superintendent at Clarkdale-Jerome School District. “So there would be no impact if a flu epidemic were to occur on the 100th day.”

Though enrollment plays a role in a district’s Average Daily Membership – funding mechanism – the two are not the same.

With the 100-day current-year funding mechanism, districts are forced to guess what their student count will be.

Current year funding, according to Mingus Union Superintendent Mike Westcott, puts a “large burden on districts to plan, propose, and approve budgets based on their own projections, as we can no longer use the prior year’s known values.”

“It’s good to remind the community that it’s like trying to create a home budget without really knowing what funding you will receive, since that is based on estimates,” Westcott said. “If we make a mistake in estimating enrollment, it will cost us.”

Since school districts employ people on a contractual basis, they are obligated to pay those contracts regardless of their budgetary situation, Brown said.

What if the state of Arizona was able willing to change the funding mechanism?

“It would be amazing if Arizona could continue to increase school funding, commit monies to school facilities and pay salaries commensurate with other states,” Dearden said.