Exotic glamping experience is a walk on the wild side 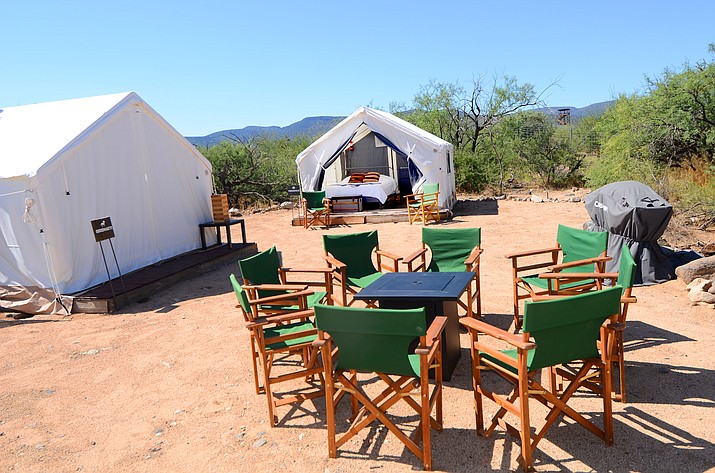 A national luxury camping company has partnered with Out of Africa to establish an exotic camping experience inside the popular animal park. VVN photo/ VYTO STARINSKAS

CAMP VERDE -- A national luxury camping company has partnered with Out of Africa to establish an exotic camping experience inside the popular animal park.

The Stout Tent glamping experience locks campers inside a one-acre enclosure at the wildlife park. Animals walk by and stare at the campers through a 16-foot high fence as they huddle around a propane fire pit.

The Out of Africa website makes is clear the animals that surround the Safari Village campground are “non-predatory only.”

But the hyenas, lions, tigers, bears and hundreds of other animals are within listening distance in enclosures farther away in the park and can be heard as the sun sets just over the Out of Africa zipline towers.

The Out of Africa glamping site is the first permanent luxury camping site for Stout Tents, according to Stout Tent Event Coordinator David Beard.

The eight-employee Phoenix-and-Vermont-based company has been successful in providing glamping tents and add-ons for events such as music festivals, weddings and the annual Verde Valley Wine Festival in Clarkdale. He said they provide glamping tents all over the country through on-line inquiries.

“Our goal is to be no-trace behind as possible,” he said. The tents are available with fully-functioning bathrooms and showers and the water is captured and hauled off-site.

“We’ve set up to 300 tents before for a music festival,” he said. A wedding may be 20 or 30 tents with a bathroom unit. Out of Africa has four luxury tents on wooden platforms, which are not used at temporary events.

“It’s a nice way to reconnect with nature and still have some have some of those comforts that you don’t normally get with a Coleman tent,” Beard explained. “I see it exploding to be honest.”

One example of glamping’s increasing popularity is the recent proposal by another national glamping company, Under Canvas, to build a glamping site of 125 tents in a remote area at the end of Bill Gray Road, about 11 miles from State Route 89A.

The proposal was met with concern from local residents who didn’t like it built in the remote location. Another major concern was the amount of traffic it would bring to Bill Gray Road. However, Out of Africa is just off SR260, a busy highway with access.

Stout Tent said the Out of Africa site is their first permanent site, but if someone came to them with another idea, they would consider it.

Beard said glamping could actually help take some of the pressure of local rental rates on locals if tourists would stay in glamping sites instead of other options like vacation home rentals and other housing.

“We’re trying to facilitate a lodging need for the influx of tourism here,” he said, and the Out of Africa tents are on Air B&B.

Beard said the tent site is enclosed by the antelope enclosure and sometimes guests can see the giraffe peaking over a second fence.

But the sounds at night can include hyenas, wolves, lions, tigers, explained Sam Palais, who is the host who stays with the guests in the camping enclosure during their stays.

The host drives the Subaru Baha through the first double fence to get out of the camping enclosure, the 50 yards to the next double-locked fence, and then to the parking lot.

“No one can leave this enclosure on foot,” explained the host.

“People love it,” he said, attributing it to both the wild animals and the accommodations.

“We all live in homes,” Beard said. “Do something different on your vacation,” he suggested.