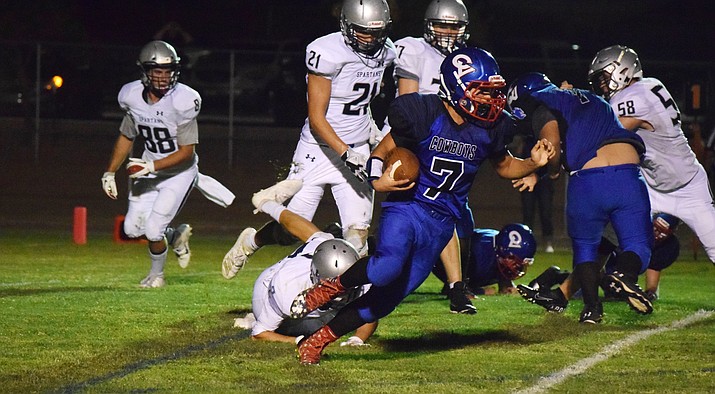 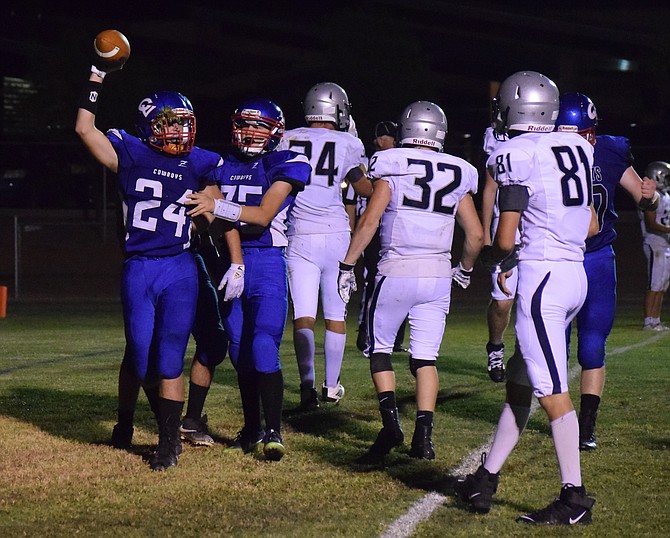 Camp Verde High football’s season got off to a slow start but the Cowboys showed promise in the second half of their season opener.

Camp Verde lost 44-8 in their first game of the season, to Scottsdale Prep, at home on Friday night.

“I did a terrible job getting the kids prepared for the game,” CV head coach Rick Walsworth said. “We weren’t prepared, I just didn’t coach very well, I did not do a very good job of getting us prepared to play our first game.”

SP lead 34-0 at the half but only outscored the Cowboys 10-8 in the second half.

“I think we’re a second half team because the first half we just don’t know what’s coming and we just get ahead of ourselves,” junior Peyton Kelley said.

After running out of time in the last drive of the first half, the Cowboys had a promising drive to start the second end on a lost fumble deep in Spartan territory.

“We didn’t make many adjustments,” Walsworth said. “We made some plays in the first half, we just didn’t string enough of them in a row together to get them off the ball or to get us in the end zone. So we got a lot of stuff we’re going to work on and we gotta coach up and that’s with film on Monday.”

Scottsdale Prep would go on to score a touchdown on the ensuing drive but that would be the last time they reached the end zone as the Cowboys went on longer drives on offense, culminating with a four-yard touchdown run by sophomore Emmitt Smith near the end of the game.

After following behind 13-0 early in the game, CV fumbled the ball at the SP 18-yard line and the Spartans returned it to the Cowboys’ 25 and scored a touchdown.

Then later Camp Verde fumbled on consecutive drives on their own 15 yard line and Scottsdale Prep cashed in on those turnovers both times.

Last season Scottsdale Prep held on to beat CV 16-12 at home but Walsworth said the final score was very flattering for the Cowboys.

“They beat themselves last year, they helped us a lot,” Walsworth said. “They fumbled a bunch of snaps and they were a much better team than they showed last year. We went out and played really hard and we did ourselves justice and played with them. That was a .500 football team last year and they were close to winning two more and you’ve got a lot of juniors and seniors.”

Scottsdale Prep opened the season with a 36-0 win over Heritage Academy Laveen at home while Camp Verde was idle. Walsworth said he wasn’t so sure playing in Week Zero helped the Spartans that much since they looked good then too.

“Week Zero lets you work out your kinks and hopefully make your mistakes that week, they didn’t make a lot of mistakes in the first game either, I was down there watching it,” Walsworth said. “I don’t know that it helped them, it definitely didn’t hurt them because they came out and they were on all cylinders (Friday) night.”

Despite the loss, Walsworth said a lot of Cowboys played with a lot of heart like Kelley, Josh Lake, Jacob Kane and many of their sophomores.

“I mean you could probably go down the roster of everybody that played,” Walsworth said. “We were out there doing some good things, we just weren’t always doing enough to force them to give us the ball or we weren’t doing enough to get it in the end zone. But our o-line, we moved the ball, we had a problem continuing and not making mistakes that kill us. We talk all the time about two things we can’t have are fumbles and pre snap penalties and we started off the first couple of series getting some pre snap penalties and then we started fumbling the ball a little bit, so we just gotta work on things and get better, but I love these guys, they played with a lot of heart and we got some guys out there doing a lot of good stuff.”

The Cowboys travel to Heritage Academy Laveen on Friday at 7 p.m.

Camp Verde’s next home game is Sept. 13 against Chino Valley.