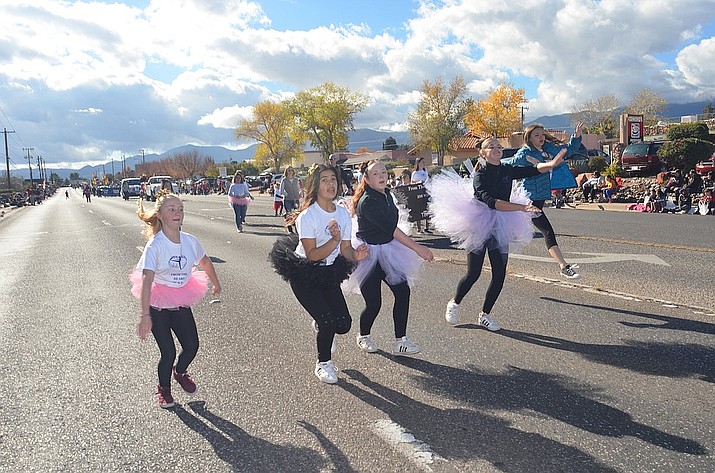 Dancers are commonly part of the Cottonwood Christmas Parade. The 65th annual event is set for Saturday, Dec. 7, starting at 11 a.m. and running from the Verde Valley Fairgrounds, east of Cherry Street and north on Main Street toward Old Town. VVN file/Vyto Starinskas

COTTONWOOD — Beginning at 11 a.m. Saturday, Dec. 7, the sounds and sights of one of the Verde Valley’s longest-running single holiday-season events will begin.

Starting from the parking lot at the Verde Valley Fairgrounds, Cottonwood’s 65th annual Christmas Parade will travel east on Cherry Street, turn left on Main Street and continue north all the way into Old Town Cottonwood.

This year’s theme is “Candyland;” the theme usually produces creative and fun costumes and floats.

The public is invited to bundle up and come watch the rain-or-shine event; many parade watchers bring lawn chairs and set up somewhere along the route.

Dancers, horses and music are often part of the parade, which will have Dan Engler as this year’s grand marshal.

Engler is the editor of The Verde Independent, Camp Verde Bugle, Kudos and The Villager.

“Mr. Engler has been here for many years, writing articles that make people think, and sometimes it involves people outside the Verde Valley,” said parade coordinator Coleen Gilboy. “He is very involved in our community, behind the scenes. His commitment to the youth in athletic events needs to be recognized; he gives of himself, his time and talents.”

The Verde Independent will publish the lineup, once received.

Gilboy said the judges stand is being moved in front of the Verde Independent offices. Large crowds typically gather at Mingus Avenue and Main Street.

Many people heading across town get stopped at that intersection and decide to watch the parade from there.

“We normally have two tow trucks backed up toward each other with four judges and an announcer on them to read the descriptions,” Gilboy said. “It ends up there a lot of spectators in one area. Since the open lot north of Circle K (the former site of the Goodwill store) has a fence, we are moving it in front of the Verde Independent.”

The judges stand needs to be on the west side of Main Street, she said.

Gilboy said she hopes there is much imagination put into this year’s entries.

Here are some of the rules for parade participants, as stated on the applications:

Candy may be handed out candy, but not thrown from vehicles.

No stopping is allowed along the parade route.

Entrants must complete the entire parade to be eligible for awards and prize money.

All vehicles should be decorated in some manner.

NO Santas are allowed. This includes no “Grinch” Santa—no inflatable Santas.

Contact Kristine Follett at events@cottonwoodaz.org with questions or call the Chamber of Commerce offices at 928-634-7593.

Well-decorated floats are commonly part of the Cottonwood Christmas Parade. The 65th annual event is set for Saturday, Dec. 7, starting at 11 a.m. and running from the Verde Valley Fairgrounds, east of Cherry Street and north on Main Street toward Old Town. VVN file/Vyto Starinskas