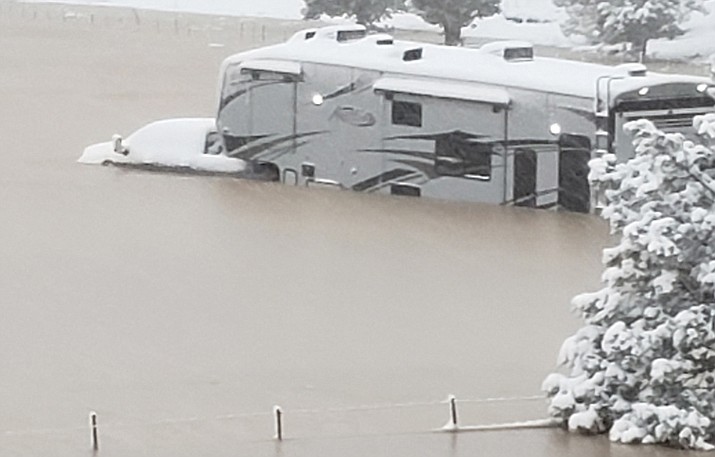 When deputies arrived, three adults were trapped as water had surrounded the truck and fifth wheel trailer and was approximately 4-feet to 5-feet deep. Photo courtesy Yavapai County Sheriff’s Office

According to a Dec. 2 news release from the Yavapai County Sheriff’s Office, the Camp Verde Marshal’s Office helped with communication by advising Copper Canyon Fire and Medical District of a possible water rescue situation.

When deputies arrived, three adults were trapped as water had surrounded the truck and fifth wheel trailer and was approximately 4-feet to 5-feet deep, the release stated.

At the time of the incident, the temperature was in the low 30s, with snow falling in the area.

The Copper Canyon Fire water rescue team arrived a short time later “and the rescue was performed quickly and effectively removing the occupants to safety just after 6:30 a.m.,” the release stated.

Camp Verde deputies learned that the group arrived in the area around 9 p.m. Nov. 28 to prepare for an elk hunt, the release stated. The group intended to set up camp the following morning.

“Overnight, there were steady rain showers in the vicinity causing what is normally a pasture to fill with water and flood,” the release stated. “Waters continuing rising overnight until discovered during the early morning hours when a call for help was made.”

The occupants of the trailer were taken to Camp Verde by deputies, the release stated. “Contact with other campers in the area of the flood plain was made to ensure no further rescues were needed.”