Life on the Road: YouTube RV family clicks on Cottonwood 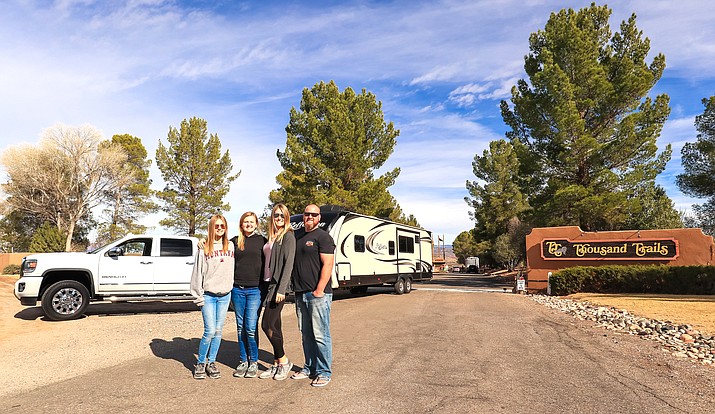 Jessie and Corey Nickerson and their daughters, Lily, 14, and Leila, 12, say traveling around the United States is “a lifestyle we absolutely love and we are gaining experiences we never imagined.” Courtesy photo

COTTONWOOD -- A YouTube family’s unusual lifestyle brought them to the Thousand Trails RV Park last week, as they visually document their journey across the United States on the internet.

“We actually sold everything,” explained Jessie, who said the family searched around and bought a fifth-wheel trailer in South Carolina and a truck to pull it in Georgia. They have not looked back since.

Sunday, they left their spot overlooking the Verde River and the Sedona Red Rocks just off State Route 260 and headed to their next destination.

Their journey to Cottonwood has taken them to stops in the Everglades, Alaska, California, Yellowstone, Mount Rainier and Wyoming. The family volunteers in order get to know local residents and the communities, she said.

Each stop is documented by Cory’s breathtaking drone footage on their YouTube page “Finding Our Someday.”

The Nickerson family is one of several families on YouTube documenting the RV lifestyle. The mother said they know many families living the same lifestyle and it’s a growing trend.

“We are at it two years, and we realize what we’ve found is that this is a lifestyle we absolutely love,” she said, “and we are gaining experiences we never imagined.”

During their stay in the Verde Valley, they volunteered at the Old Town Mission, collecting donations, food and turkeys for the mission in front of Fry’s with the fire department.

“Our girls are having experiences that are growing them into incredible young women.”

The main reason they started the new lifestyle was that her father was diagnosed with Lou Gehrig’s disease, and he never got to enjoy his retirement or his “someday,” she continued.

The family reevaluated where they wanted to live. During their research, they found out that families were living an RV lifestyle, seeing the country and finding situations that worked for jobs.

The Nickersons were already homeschooling their children. Her husband owned an auto and boat detail shop and photography business and she owned a spray tanning salon.

“It’s been very nice for him to able to document our journeys as we’ve taken on this new lifestyle,” she said, referring to photography talents.

The YouTube channel is monetized and is “slowly building,” she said. They had saved for three years because they knew that they were going to make a big change in their lives.

The Nickersons have met many young families that live a similar lifestyle to them.

They hung out with a family with four children near Page who were living in a RV. The father can work from the road, she said. They are going to see the country and provide a different lifestyle for their children.

The RV community on the road is surprisingly tight and includes a full array of people from retired to families to singles to the homeless. There are all ages and “everybody has a story” that bonds them in this community, she said.

“I wanted the girls to experience giving back to a community during the holiday,” their mother said, and she found out that the Old Town Mission could use help with the turkey drive at Fry’s Food Store. “It connects you to that place,” she said.

Sedona is “absolutely stunning,” and now they have a place in their hearts for Cottonwood because of its incredibly generosity and the Old Town Mission.

The teenage girls are making new friends on the road; staying connected with old friends through social media and other technology; and reuniting with former friends who have moved from Maine.

“They are making more friends than if we had stayed in Maine,” the mom said.

Cottonwood was on the way from the Grand Canyon and Phoenix so they stopped at the Thousand Trails where they are members, she said

“It got pretty chilly last night, but you know it’s impressive how well a small electric heater can really heat an RV up,” said Jessie Nickerson. “We’ve been nice and toasty all night.”

“We’re just blessed and really excited to see what comes next,” the mom said.

It's the last day for Jessie Walters
Taking flight: 100 Angels nonprofit provides medical relief to migrant families
The Other Gavers: Children taught to always protect each other from anyone who attempted to separate the family
Cottonwood approves bicycle corrals in Old Town
State schools chief wants to repeal ‘no promo homo’ law