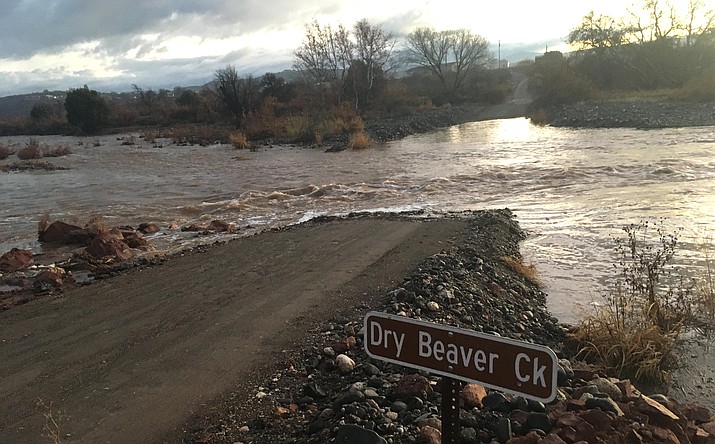 Sixteen Copper Canyon firefighters, including members of the department’s swift water team, searched from above the creek via Brocket Ranch Road until they spotted the 57-year-old man. VVN/Vyto Starinskas

Flood conditions as of 8 a.m. Thursday

As of 8 a.m. Thursday, according to the U.S. Geological Survey:

-The Verde River near Clarkdale is flowing at 17,400 cubic feet per second.

-Oak Creek near Cornville is flowing at 2,810 cubic feet per second.

-Oak Creek near Sedona is flowing at 2,480 cubic feet per second.

-The Verde River at Camp Verde is flowing at 1,220 cubic feet per second.

But the creek wasn’t dry, Copper Canyon Battalion Chief Dale Duns said Thursday as he described what he called a “dynamic rescue” that involved close to 40 of the county’s first responders.

At about 6 p.m., Copper Canyon Fire received call that a man tried to drive his vehicle across Dry Beaver Creek in the area of Culpepper Ranch Road, according to Dwight D'Evelyn, public affairs supervisor with the Yavapai County Sheriff’s Office.

“His vehicle was swept down the creek,” Duns said.

Upon arrival, 16 Copper Canyon firefighters, including members of the department’s swift water team, searched from above the creek via Brocket Ranch Road until they spotted the 57-year-old man, D'Evelyn said.

“Beginning at the point of last contact, we built a box, and worked within that box until we spotted him,” Duns said.

Duns estimated that from arrival to rescue was “no more than 30 minutes.”

When Copper Canyon reached the man, he had “self-extricated and made it to shore,” Duns said.

Duns and D'Evelyn confirmed that the man refused any additional medical treatment.

“He told me he began to drive into the water and stopped because of how deep it was,” D'Evelyn said. “He backed up a few feet and put his pickup truck in four-wheel drive. When he attempted to drive through the water this time, he got approximately half of the truck into the river before realizing the water was too deep.”

The man then “placed the truck in reverse and attempted to drive out, but the river flashed and the front end of the truck started to get pulled down stream,” so he rolled the windows down so he could escape if needed,” D'Evelyn said.

The truck began filling with water as it drifted down stream, and the man exited his vehicle through a window, D'Evelyn said.

“He told me he got sucked under water, but was able to come back up and got to the edge of the river where swift water rescuers retrieved him from this location,” D'Evelyn said.