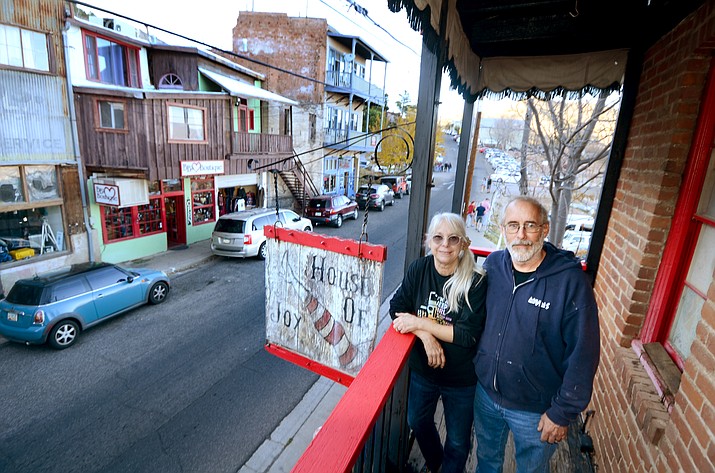 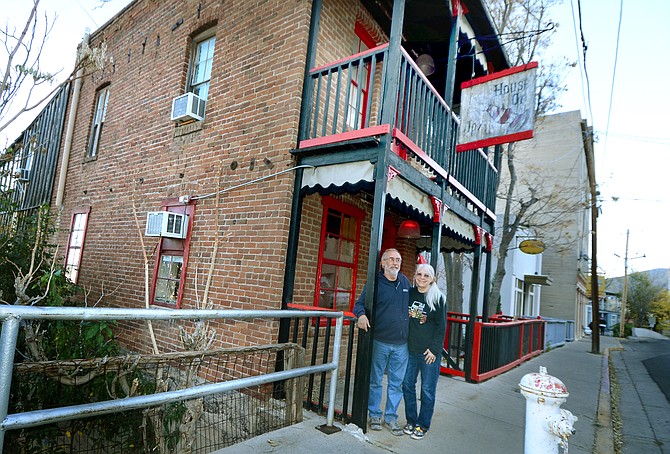 Chuck and Mimi Romberger are the new owners of the House of Joy in Jerome. VVN/Vyto Starinskas

JEROME — Chuck and Mimi Romberger said they have bought the House of Joy in Jerome and hope to reopen the business by March.

The 100-year-old building is a former bordello, then a gourmet restaurant and most recently an eclectic knick-knack shop.

“We bought it,” explained Chuck Romberger. Now the building will be an art gallery with a small vintage arcade game-room. They will keep the House of Joy’s original bordello name and classic “leg” graphic on its sign, she said.

The whole street had so many brothels, the area was nicknamed “Husband Street,” Chuck Romberger said, referring to the area between the former House of Joy and the former Cuban Queen brothels.

The couple spent their first night in the attic bedroom of the House of Joy several weeks ago. The room looks out at the streets of Jerome, which are filled with tourists in one direction; the Sliding Jail in another direction; and endless views of the Verde Valley to the north.

The couple found the House of Joy because Mimi’s daughter is a big fan of the rock band, Tool, she said, and Jerome resident Maynard James Keenan’s is the frontman of the band

So the family went to visit Keenan’s store, Puscifer, in Jerome, which Keenan owns and runs with his wife Jennifer.

“We walked around and we saw the for-sale sign,” Mimi said of the House of Joy. The couple said they bought it from Mary and John Dempsey, who owned it for 50 years, in order to open it as a gallery.

Dempsey ran the business as a small fine-dining restaurant for about 30 years before turning it into a unique gift shop for another 20 years.

Asked what their plans are for the House of Joy, Chuck Romberger responded:  “gambling and hookers,” with a laugh. “What else? We want to bring it back to its former glory,” he joked.

In truth, the couple said their immediate plan is to turn the two-story building into an art gallery for Mimi’s work. Other artists featured at the gallery will be Nancy Bollard, with her felting arts; Masoud Yasami with oil paintings and Pam Butterfield with her oil and acrylic paintings.

They plan to have a display commemorating the history of the building, along with a small room with their “old-school” video arcade games, such as Pac-Man.

After almost 40 years in the industry, the couple decided to move from Northern California back to Payson five years ago to be closer to his family.

“(She’s) Mario’s mamma,” Chuck said, referring to his wife, who drew the Mario on the 2600 Atari. “She’s the most distributed artist of all time,” said Chuck of his wife.

Mimi later worked as an art director at Sega, with the Jurassic Park game being among her signature projects, and also worked for one of George Lucas’ spinoff education company, Lucas Learning; worked the animation for the opening scene of Princess Bride and designed the popular Java icon.

There are more copies of Mimi’s work out there than any artist, he said, estimating there are several billion copies of her work in the world on everything from video games to keyboards to software icons.

There will be Jerome souvenirs at the new gallery, and they utilize the same House of Joy logo, Mimi said.  “We’re going to keep the history going.”

There will be a tribute display to John and Mary Dempsey and how they built up the building, she said. “It’s an icon.” They plan to keep the building looking consistent with Jerome’s historic appearance.

The couple said they will split their time between their new acquisition and their home in the Payson area.

Carol Anne Teague of Realty One Group Mountain Desert is the real estate agent who sold both the House of Joy and Cuban Queen former bordello properties.

She said she does not have any more former bordellos listed for sale, but there at least three other such buildings still standing in town.