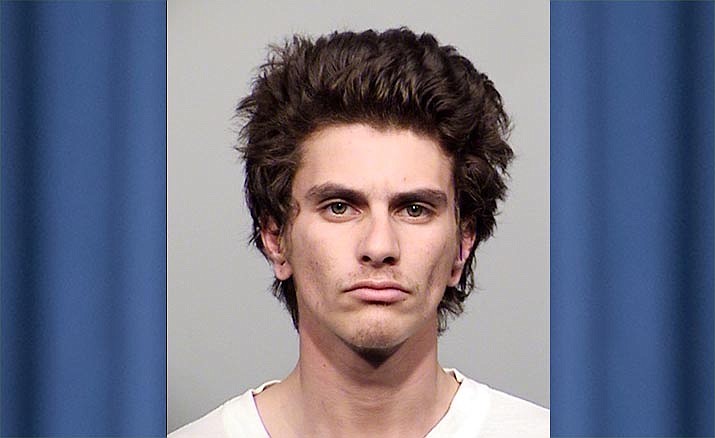 Yavapai County Sheriff's Office Public Affairs Coordinator Dwight D'Evelyn reported at 12:20 p.m. today the victim in this incident is not dead, but, rather, "remains on life support with slim chances of survival according to detectives. It has also been confirmed that the victim is a registered organ donor.

"This error is mine and comes from a misreading of the initial report. My sincere apologies for this oversight.

"The suspect's primary charge at this time is Attempted Homicide."

The story and headline to this story have been modified to reflect these corrections.

CORNVILLE -- A 23-year-old Cornville man, David Joseph Shultz, has been booked into custody on a charge of attempted homicide after allegedly beating another man Dec. 7.

A news release from Yavapai County Sheriff’s Office Public Affairs Coordinator Dwight D'Evelyn indicated the 22-year-old victim had been beaten with both a bat and a hammer.

The news release states deputies were dispatched to the 11000 block of East Clatterbuck Drive, Cornville, at around 6:30 p.m. regarding an unconscious adult male with a severe head injury.

“Deputies began rendering first aid attempting to slow/stop the bleeding pending arrival of Verde Valley Fire personnel,” D'Evelyn explained. “Deputies noted a large amount of blood evident inside the travel trailer where the victim laid. A hammer with blood on it was discovered at the victim’s feet. Fire personnel arrived within minutes, treated the victim, and transported him to Verde Valley Medical Center. He was later taken to Flagstaff Medical Center.”

D'Evelyn explained that a relative of Shultz, who originally found the victim, remained on scene to speak with deputies. He told them Shultz had gone to the nearby home of another family member where he allegedly admitted to striking the victim with a bat.

“Shultz left and that family member contacted him by text concerned about what Shultz had stated,” the news release states. “They went to the Clatterbuck Drive house to check on the victim and found him on the floor with major head injuries becoming overwhelmed by the gruesome scene.”

“A detective soon developed information that suspect Shultz could be hiding out at a home in the 2700 block of Candler Drive in Cornville,” the news release states. “Deputies contacted a resident there and learned Shultz had been seen a short time ago and may be inside a trailer on the property. Deputies and detectives surrounded the trailer, called for Shultz and he eventually came to the front door. He was taken into custody without incident.”

Shultz is being held without bond. He refused to discuss the incident with authorities, D'Evelyn said.

YCSO has not yet identified the victim until family members are first notified.