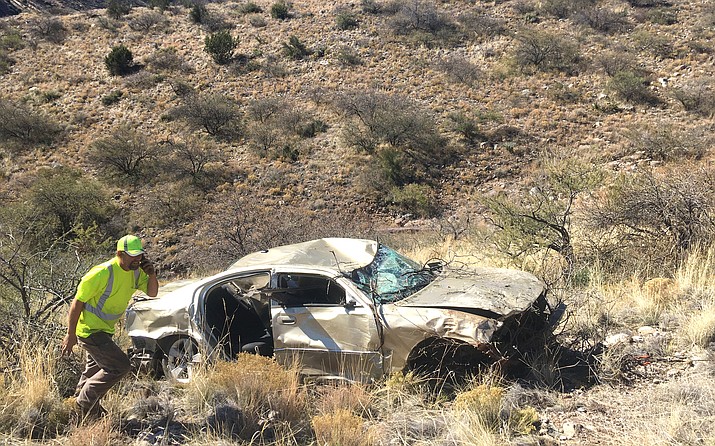 Jerome Police Chief Allen Muma said the initial investigation indicates the vehicle left the roadway and was airborne for 121 feet before impacting and rolling another approximately 300 feet to a point where it came to rest. The driver was going 65 miles an hour at the time of the crash in a 20 mile-per-hour zone. VVN/Vyto Starinskas

One person was flown by medical chopper from this accident late Monday evening in Jerome after going down a steep hill at the hairpin turn near the old Jerome High School. Stix Men Towing said they needed 475 feet of cable to reach the car on Tuesday during the recovery. Watch for more information about this accident here and at verde news.com. VVN/Starinskas

JEROME – A driver was listed in good condition Tuesday after his vehicle rolled about 400 feet down a steep embankment late Monday afternoon.

Jerome Police Chief Allen L. Muma reported that his office received the call at 5:38 p.m. Monday concerning an unknown injury accident on State Route 89A near Dundee in Jerome. Conflicting information was received as to the number of victims and extent of injuries, Muma said in a news release.

“Jerome PD officers as well as Clarkdale PD officers arrived first on scene, followed by Jerome Fire Department personnel and located the vehicle, which had left the roadway and rolled approximately 400 feet down a steep embankment,” the news release stated. “A single occupant (driver) was located in the vehicle. He was semi-conscious and had visible signs of injuries. Treatment was initiated and an extrication plan was established.”

“Due to the location of the crash site,” the news release continued, “the mechanism of injury to the patient, and steepness of the rugged terrain, the DPS Ranger 1 helicopter was requested. A steep angle rope rescue system was initiated as a secondary backup in the event the helicopter had problems.

“Mechanical extrication was utilized to remove the patient from the vehicle. The patient was stabilized and packaged for transport. Paramedics treated the patient as crews awaited the helicopter and the steep angle rope rescue setup.”

Muma said the DPS Ranger helicopter arrived and lowered a paramedic to the crash site.

“The patient was packaged for helicopter winch operations and lifted from the scene. He was transported directly to Deer Valley Hospital in Phoenix for treatment. Current condition of the patient was listed as good,” Muma explained.

“Arizona Department of Public Safety is assisting Jerome PD with the accident investigation as there were indications of possible drug intoxication by the driver,” Muma continued.

The police chief said it is unknown if the driver was wearing his seatbelt.

Muma said the initial investigation indicates the vehicle left the roadway and was airborne for 121 feet before impacting and rolling another approximately 300 feet to a point where it came to rest. Muma said the driver told officers he was going 65 miles an hour at the time of the crash.

“We wish to thank all agencies who assisted in this event including Clarkdale PD, Jerome Fire, Cottonwood Fire, Verde Valley Fire, Verde Valley Ambulance, Native Air, DPS Ranger, and DPS Troopers. This incident was successful due the excellent work and cooperation by all involved,” said Muma.