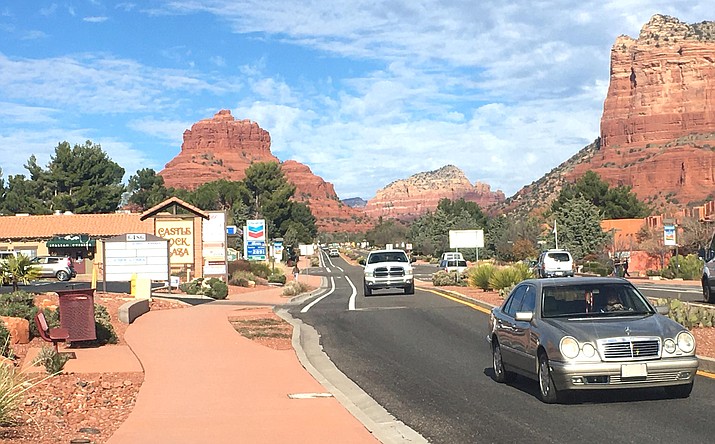 VILLAGE OF OAK CREEK — Gary Krupa knows he can’t do it alone. That’s why he wants his neighbors’ help — and their ideas.

Krupa has researched a few of the elements of what it takes for a community to incorporate and become a city. In about four months of research, he seems to have made it just far enough to learn how much there is to learn about the process.

“There’s a lot to it, and one person can’t do it,” Krupa said. “For one, we need revenue statistics and forecasts.”

Best approach to VOC incorporation is to

Krupa plans to schedule a public discussion meeting where all will be welcome to bring ideas and concerns about incorporation.

Krupa said the construction of the Elements hotel, along with the Yavapai County Board of Supervisors and Planning and Zoning Commission’s unanimous approval of re-zoning for a Hilton Hotel project, have been the last straws for himself and many other Village of Oak Creek residents.

He said the two businesses and their buildings don’t fit into the Village, on many levels, and enough residents want more local control over development. He believes self-government through incorporation the best method to address those concerns.

Also, he said, residents want to have a local share of the revenue from businesses in their area, and want to be able to use that revenue as they see fit, to meet VOC’s needs.

While additional layers of rules and regulations from yet another layer of government or concerns about property taxes seem to be among the main reasons for opposition, Krupa believes the time has come where Village of Oak Creek residents no longer have anything to lose.

“Sure, there will always be fears that going a new direction will not work out, restrict our freedoms or our wallets,” says Krupa, who is a certified public accountant by trade. “But look where we are now. We’re at the mercy of the county. The Board of Supervisors and Planning and Zoning don’t seem to be hearing our concerns, and our property values are at the whim of what prospective buyers think of having big hotels and increasing traffic nearby. If it turns out we can’t limit growth, well, we sure can’t limit it under present circumstances.”

Krupa has written an article that he has shared with The Verde Independent regarding what he’s learned so far. He points out that an additional local property tax isn’t automatic —Sedona, Camp Verde and Cottonwood have never had such taxes  — as there are other forms of revenue.

“There’s no requirement to have a property tax to provide revenue to cover our operating costs,” Krupa writes. “Instead, like Sedona and half the cities and towns in Arizona, we can rely on a share of the state’s Transaction Privilege Tax or TPT, i.e. Arizona’s version of the sales tax, shared revenues from the state’s income tax, and other taxes like hotel and bed taxes, and a share of vehicle registration taxes collected.”

He also points out that utilities, garbage and recycling are already not municipal functions, and a new city could contract with either the Sedona or Verde Valley fire district and the Yavapai County Sheriff’s Office for services already provided.

“Contracts would help us directly deal with agencies, and not have to rely on going through someone else first,” Krupa said. Krupa’s “VOC, Inc.” isn’t a formal organization, and he hesitates to say he’s in charge of anything organized. He just happens to be the only village resident to have verbalized the desire to incorporate at a recent Board of Supervisors meeting, having done so on Nov. 20.

That was the meeting where the board voted, 5-0, to go with the county Planning and Zoning Commission’s 10-0 recommendation to approve rezoning for the Patel family’s Hilton Hotel.

Dozens of Village of Oak Creek residents spoke against the re-zoning at the meeting, including Thomas McPherson, whose Sedona Collective is for sale. He pointed out that an approved planned area development could have bound the owners of the Hilton property to specifics, rather than a C2-1 designation that carries with it 11 Planning and Zoning-imposed restrictions.

These are the types of control Krupa would like to have in the hands of a governing body that has real power — to create code and ordinances, to lobby state leaders as part of organizations such as the League of Arizona Cities and Towns and to hire key qualified personnel. A finance director, city attorney and public works director would have skills and membership in trade organizations that would help them network for resources.

“The Big Park Council and the Village of Oak Creek Association have done great work on their fronts, through the years,” Krupa said. “But now, we’re dealing with things that are over the heads of an advisory council with no enforcement power, or a property owner’s association. For example, there was recently a motorcycle event that came through town, with all the vehicle noise and music that went with it, and all we have are sheriff’s deputies — who have a long list of priorities — and county ordinances to deal with something like that.”

As an accountant, Krupa knows what blanks must be filled in on the numbers side — he knows what data is needed, such as gross receipts histories and projections. He also knows it takes a two-thirds majority of registered voters in an area of at least 3,000 people in order to form a municipal government.

The last town to form a municipal government in Arizona was Tusayan, which became the state’s 91st municipality in 2010.

Tusayan, located along State Route 64 near Grand Canyon Village, was only required to have a population of 500 or more because it is adjacent to a national park.

Krupa said he’s talked to leaders in Cave Creek, who described the town’s process of incorporating in the mid-1980s. He has also talked with visitors to the area who have connections to Hamburg, N.Y., where being incorporated helped the town block construction of an asphalt plant.

“Those of us who care about this will, inevitably, be interrupted in this process by the business of life, but we won’t stop until we get this done,” Krupa said. “It’s not a matter of if the village will incorporate, but when.”