Clarkdale: three top-priority streets to be repaired in spring 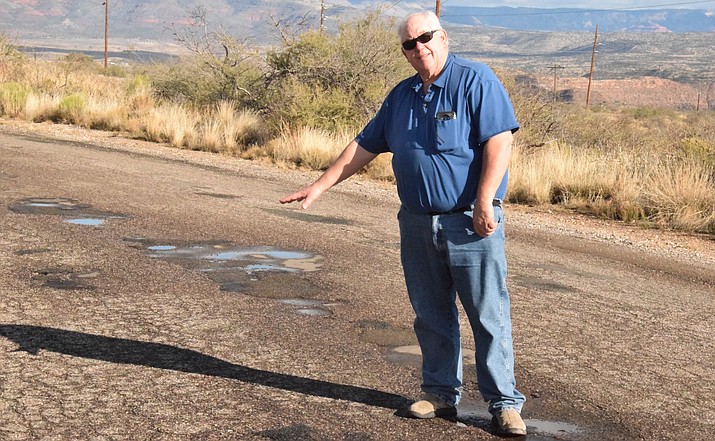 David Brinkley points to a section of the “good” surface along Old Jerome Highway that will be part of three crack-sealing projects to take place in Clarkdale after temperatures warm in the spring. Clarkdale street conditions have brought flak toward the town council and staff. VVN/Jason W. Brooks

“After our bond didn’t pass last November, we came to council with a list of prioritized streets in April,” Hazine told the Council. “So now, in Fiscal 2020, we’ve got to work on arterial streets with the little money we have, followed by smaller streets, if there’s any money left over.”

Hazine said there is about $1 million in funds to be used for road repair, accumulated over multiple fiscal years. Hazine said safety hazards will be an exception; hazards will be fixed regardless of their place on a priority list.

The first area for repair Hazine mentioned was Main Street, from the intersection at North Broadway, through downtown and ending at Cement Plant Road.

“The Arizona Department of Transportation funded a project covering the intersection of Broadway and Main, and NACOG funded some projects to the east,” Hazine said. “So we’ll be using fine rubber chip-sealing on Main west of that intersection at Broadway.”

Hazine explained that rubberized chip sealing involves a machine that coats chips with rubber before laying them onto a pre-treated surface.

Two other street projects on the town’s list of priorities will receive crack sealing and a protective overlay, plus re-striping to include bike lanes. These are Clarkdale Parkway — from Cement Plant Road to Sunset Boulevard — and Old Jerome Highway.

Hazine said the $1 million budget affected the decision to limit the priorities to three streets, as does the wildly fluctuating price of oil worldwide. Oil prices affect the prices of asphalt and other road products. Vice Mayor Richard Dehnert asked Hazine if the town’s agreement with Freeport McMoRan, which runs large trucks across Clarkdale streets for an intermittent project in the area, will provide much revenue to help bolster the city’s road fund; Hazine essentially said no.

“So, rather than a golden goose, that fund is more like a bronze duck,” Dehnert said.

Hazine said the projects will go out for bid in the first two months of 2020 by Council approval. That will give his department plenty of time to prepare to work on the three streets in the warmer months, once freezing and thawing is done in the spring.

He said he put in for an ADOT grant for repairs to Main Street on the other side of the Broadway intersection, all the way down to the RV park. The town will need to wait until its next “turn” in a Verde Valley rotation that involves other municipalities, finishing off Main Street repairs to the town-limit line in 2024.